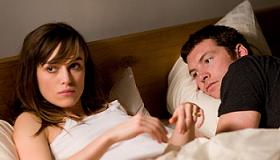 Joanna (Keira Knightley) and Michael Reed (Sam Worthington) have a nice New York apartment but a floundering marriage. Joanna's having trouble concentrating on her writing and grows upset when she meets Michael's sultry new employee, Laura (Eva Mendes). Wondering if they're having an affair on business trips, Joanna gets an unexpected chance to test her own fidelity when old flame Alex Mann (Guillaume Canet) comes to town while Michael's away. Over the course of one night, husband and wife are both tempted to cheat. The glossy Manhattan footage, as hermetic as Woody Allen's rendition of New York, is engagingly expensive-looking at least, but the cast is barely given anything to work with. Commercial prospects will be limited to fans of the leading four actors—arguably a small group.

The next day, Joanna runs into Alex on the street. Canet has, if anything, even less than Knightley to work with: his personality is whittled down to a self-satisfied smirk and rubbing his beard in a reductive version of Gallic charm. Sparks don't exactly fly between the pair: mainly Knightley grows more worried-looking and harried, especially in conversation with Alex's publisher friend Truman (Griffin Dunne, the only performer in the film exuding actual personality). In his own potential affair, Worthington remains as stolid as he was in Avatar, demonstrating a rigidity that proves less effective here. Mendes leaves no impression.

The dialogue is mostly unworkable: "How's Paris?" asks Knightley. "How are you?" replies Canet. Elsewhere, Knightley tepidly talks about her trouble writing. The whole film takes place in a Manhattan untouched by the recession and seems similarly uninterested in the characters' alleged jobs. That would be OK if the film ever had a point to make about relationships (or the charm of a similar romance-in-a-night film like Before Sunrise); instead it sets up a situation and leaves any fallout deliberately unresolved.

Presumably, the effect is to prod viewers into examining their own views on what they'd do if they either committed adultery or learned of a partner's infidelity, but—without entering spoiler territory—the way the film concludes (one partner remains faithful while the other cheats) seems to be underlining a dubious, gender-role-weighted thesis. Since the film has no interest in the inner life of its characters, it feels like a hollow work dedicated to proving a thesis about the different ways men and women think. Shallow and glossy, the film tries to spend its way out of trouble to no avail.