close
Nostalgia in the City of Light and Love 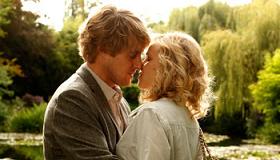 Woody Allen's time-travelling comedy Midnight In Paris is a valentine to Paris and an absolute delight. In this, the writer/director's first feature shot entirely in France, Owen Wilson plays a romantic who longs for the Paris of old and gets what he wants each night at midnight, when he is magically whisked away for encounters with some of the great artists and thinkers of the 20th century. Although Allen is hardly forging new ground, his true fans will be charmed by this whimsical tale and should turn out to deliver his best numbers since Vicky Cristina Barcelona. A strong afterlife is assured as this picture earns a place of honor among Allen's best.

Midnight recalls the clever intricacies of The Purple Rose Of Cairo in which Jeff Daniels played an ordinary movie fan who suddenly finds himself interacting with the characters onscreen. Here Wilson, in his best performance in years, plays Gil, a young would-be writer engaged to Inez (Rachel McAdams), the whiny daughter of two rather pompous parents (Mimi Kennedy and Kurt Fuller). The foursome are on a shared vacation in Paris when Gil suddenly finds himself picked up by a car and whisked to a fancy party populated with some of the great names of the 20th Century including Zelda and F. Scott Fitzgerald. As a true believer and aspiring author, Gil is fascinated by his time-tripping journey and yearns to go back again to give Ernest Hemingway his novel manuscript. Hemingway promises to show it to his good friend, Gertrude Stein (Kathy Bates). Returning night after night at the same time he finds himself delving deeper into the world of these greats and becoming romantically involved with Adriana (Marion Cotillard), fabled lover of Picasso, Modigliani and others. Slowly, his own relationship begins to unravel as Gil finds his calling among a bunch of very famous people we thought dead—only not in Allen's cinematic world.

Deftly scripted with plausible dialogue and situations, Allen runs with the concept and gets to create a hilarious satire revolving around a group of icons he clearly admires. Wilson is the perfect alter ego for Allen; with his deadpan charm he brings credibility to Gil, a guy born to the wrong era. McAdams is the heavy here and plays it to the hilt. Among the supporting players, Cotillard is lovely as a woman who just can't stay in a good relationship, even if it is with history's most famous men. Bates is perfect as Stein while the gorgeous Léa Seydoux is wonderfully understated as a like-minded French girl Wilson meets at an outdoor market. Adrien Brody steals his scene as Salvador Dali with a dead-on accent and France's first lady Carla Bruni capably shows up as a museum guide.

A more memorable trip to the City of Light you could never imagine.