close
The best Pirate outing yet!

Pirates of the Caribbean: On Stranger Tides 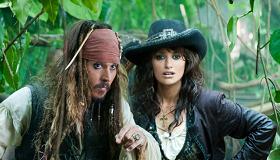 Disney should prepare for another huge Pirate's booty with the fourth installment in the hit franchise, their first since 2007's At World's End. Thanks to nifty new villain Blackbeard (played to the hilt by Ian McShane), a ravishing Penélope Cruz and the iconic performances of Johnny Depp and Geoffrey Rush, this is the perfect summer movie and perhaps the best Pirates of them all. As Captain Jack Sparrow sets out on a search for the fabled Fountain of Youth, On Stranger Tides trades on an exciting blend of clever comedy, swashbuckling adventure and thrilling action, all in brilliant digital 3D. Box office will be through the roof worldwide, hopefully leading to the beginning of a new trilogy with these irresistible scallywags.

The storyline involving Will Turner (Orlando Bloom) and Elizabeth Swann (Keira Knightley) was pretty much played out in the first three films, which left Disney, Producer Jerry Bruckheimer and creators/screenwriters Ted Elliott & Terry Rossio with the challenge to infuse a fourth film with intriguing new characters who could take the tale in fresh directions without losing what made the franchise work in the first place. Of course bringing back Depp's cinematic treasure, Jack Sparrow, was a must, and now he is surrounded by players who are right up to his ‘A' game. Still searching for the Black Pearl, Sparrow is looking for a new gig. After posing as a judge to spring his old mate Gibbs (Kevin McNally) from the gallows, he learns of a map to the Fountain of Youth. Along the way he runs into an old flame he betrayed, the stunning Angelica (Penélope Cruz), a pure-bred con-woman out for revenge. They fight but Angelica needs him to meet her goals, so she leads him aboard the Queen Anne's Revenge, the ship of the evil and cunning Blackbeard (McShane). With Angelica passing herself off as Blackbeard's long lost daughter, Sparrow finds himself pitted against the legendary pirate. Complicating matters is the indefatigable Captain Barbossa (Rush), also on the hunt for the Pearl. Added to the mix is the moral and upright young missionary Phillip Swift (Sam Claflin) who tries to reverse Blackbeard's dirty deeds while getting involved with gorgeous mermaid Syrena (Astrid Berges-Frisbey) who's capture becomes a key component in the efforts to locate the Fountain of Youth.

The scale of production is, as usual, enormous, and first time Pirates helmer Rob Marshall (Chicago, Memoirs of a Geisha, Nine) uses his background in movie musicals to bring an almost lyrical grace to the mayhem. With fights choreographed like musical numbers, the film has pulsating rhythms that make it soar throughout. Marshall's tech team is tops, with outstanding production design, cinematography, visual effects and a great Hans Zimmer score.

Marshall also proves adept with his actors, never letting the scale of the enterprise overtake them. Depp is perfect and hasn't changed much of Jack's modus operandi for this outing. Cruz is a terrific counterpoint and the pair sizzles onscreen. McShane is evil personified as Blackbeard while Rush steals every scene he's in as the scenery chewing Barbossa. Pirates veteran McNally is a delight as Gibbs. Blink early on and you will miss a sly one-line cameo from Marshall's Nine star Judi Dench as a befuddled society woman Sparrow briefly encounters.