close
Leaves you teased and unsatisfied 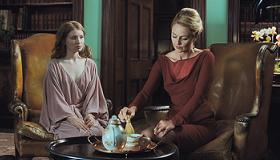 We could expect more from a film that lists Jane Campion as a "script mentor." Australian Novelist Julia Leigh's directorial debut is a film about a young student drugged into sex with a succession of elderly yet wealthy men. This dark fable of sexual exploitation and the peccadilloes of the elder male has its moments, not least in the performance of Emily Browning as the object of desire. While the sexual content could prove a draw in some quarters, the film remains an obscure and ultimately unfulfilling experience—not unlike some of the encounters depicted.

To help pay for her studies Lucy has a series of jobs, from undertaking medical experiments to waitressing. She replies to a newspaper advertisement that comes from a much darker environment. The job requires her to become a "sleeping beauty" in a luxurious house where various elderly men come to satiate their desires.

Although she has absolutely no memory of anything that happens in the bedroom she finds that her new found employment comes at a cost: she starts to get curious and decides to make a secret recording of the goings-on. When the camera records the assisted suicide of one of her clients as well as her own accidental overdose (although she survives and is revived) she finds that the spell woven around the "sleeping beauty" is broken for good.

Leigh suggests she likes to confound an audience's expectations by leaving them with various loose ends. This may work as a concept but leaves you frustrated.

The girl's relationship with her friend Birdmann (Ewan Leslie), who eventually dies in her arms, is so irritatingly under-developed you're never entirely sure what is going on between them.

Leigh certainly has a sense of cinematic style and Emily Browning possesses a fragile beauty that hides a remarkably resilient interior. It's a pity, however, that Jane Campion did not exert a more powerful sway on the result.