close
Just the three of us 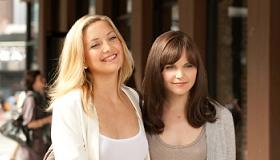 Something Borrowed is a snappy rom com about intersecting desires among a group of twenty-something friends. The film is terrific: smart, sexy and funny, and it should serve as nice counter-programming by Alcon and Warner Bros against the comic book tentpole Thor. It may not open with big numbers but it should generate enough decent word of mouth among its target female audience to win a few weeks of good theatrical attendance and a healthy afterlife in home-viewing platforms.

Darcy (Kate Hudson), party girl extraordinaire, is engaged to handsome attorney Dex (Colin Egglesfield). Darcy's lifelong best friend Rachel (Ginnifer Goodwin) has harbored a secret crush on Dex since they went to law school together, but because of the love she shares with Darcy, she'll never fess up to Dex. In turn, Rachel's good friend Ethan (John Krasinski) has concealed feelings for her while dodging Darcy's amorous friend Claire (Ashley Williams). Meanwhile, there's the charming rascal, Marcus (a hilarious Steve Howey), who's got a thing for Rachel but would be perfectly eager to transfer those affections to anyone with estrogen. Complicated? The real crux of Jennie Snyder Urman's sharp script (adapted from Emily Giffin's chicklit best seller) is the love triangle between Darcy, Rachel and Dex, especially after a drunken weekend in the South Hamptons where the repressed Rachel and Dex do the unthinkable, and then sober up and try to act normal as the wedding proceeds as planned.

What makes this all work is an enormously winning ensemble cast. In a reverse bit of casting from her last 600 rom coms, Hudson wisely isn't at the center of audience affection , playing the irresponsible and not particularly sympathetic wild girl who has corralled a guy who rightfully should be with her best friend. Goodwin, a fine actress who has been waiting to break big since her turn as Johnny Cash's first wife in Walk the Line, is ideally cast here and convincing as someone who has to traverse the tricky road between head and heart, best friend and potential soul mate. Winning supporting honors though is Krasinski (TV's The Office) who couldn't carry his own dreadful romance License To Wed but in smaller roles (example: It's Complicated) manages to steal his every scene. Egglesfield, a model and soap opera actor, is good for a guy who looks like he just stepped out of an underwear ad, but he's perfect as a lust object to two very different women. Hey ladies, I've got a Solomonic solution: his biceps are big enough to share.