close
Evocative, frightening and heartbreaking in its apocalyptic vision 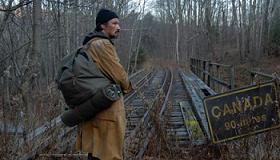 Stake Land is the movie The Road should have been. Like John Hillcoat's adaptation of Cormac McCarthy's Pulitzer Prize winner (and Zombieland, for that matter), this horror tale places a man and boy on the highways of a collapsed America, the two doggedly determined to reach a place where survival might be more assured. This is the second script director Jim Mickle and his star Nick Damici have penned together since 2006's Mulberry Street, and this one has vampires. This winner of the Midnight Madness Audience Award at the 2010 Toronto International Film Festival and selection of the San Francisco International Film Festival is a horrifying, exquisitely rendered portrait of catastrophe that has the potential to become one of the year's sleepers, reaching beyond its horror base to fans of well-wrought, dystopian drama.

Teenage Martin (Gossip Girl's Connor Paolo) narrates the story from the point where he first meets Mister (Damici). The vampires that plague their world are no heirs to the Transylvanian Count Dracula or kin to Twilight's soulful Edward. They are feral eating machines whose unquenchable hunger has depopulated much of the land and taken down the Government. But vamps aren't the only danger Mister, Martin and the friends they make along the road face as they travel from the Deep South northward to a place Mister calls "New Eden." There is also The Brethren, a fundamentalist militia and their psychotic leader Jebedia Loven (Broadway's Sweeney Todd, Michael Cerveris), who believes that the vampires are instruments of God and anyone adept at killing them (as is Mister) is a sworn enemy.

The pacing is stately, as Mickle establishes the rhythm of a pleasurable road trip, a point underlined by Cinematographer Ryan Samul's sparkling countryside views. Embroidered with Jeff Grace's mournful score, that relaxed rhythm allows the characters and their relationships to fully emerge. Gruff Mister says very little, but his comfort in his role as protector is evident as he oversees Martin's growth from boy to man and as he welcomes others into their "family," including middle-aged nun Sister (Kelly McGillis), pregnant Belle (scream queen Danielle Harris) and former soldier Willie (Sean Nelson).

The slow pace also serves Stake Land's level of suspense. It creates an undercurrent of menace in even the most prosaic scenes, an awareness that brutality and terror are lurking and might break out at any time. The cast is excellent, even Cerveris who is saddled with the least developed role, but special honors go to Damici and Paolo. The bond between Mister and his ward is a poignant one that infuses the movie with a rooting interest in their journey and the idea that there might really be something hopeful for them at New Eden-something better than more of the same.