close
Thailand-set sequel is kind of a buzz-kill 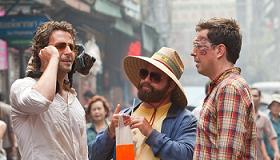 Bangkok makes Vegas seem like nursery school in the sequel to 2009's hilarious, beautifully-structured comedy The Hangover. The price to be paid for a visa to Stu's Thai nuptials is fewer belly laughs and an air of menacing mystery that won't endear Part II to moviegoers craving an escape. It's as though Todd Phillips and company experienced pangs of guilt about the success of round one and felt obliged to explore the dark side of male-bonding debauchery. They succeed insofar as the gloomy, sloppy follow-up has more in common with an actual hangover, yet it's unlikely to surpass its predecessor's record haul for an R-rated comedy.

To be sure, the pitfalls of trying to replicate The Hangover were substantial and the challenge was to tweak the template in the right places. In this harsher, raunchier film, the off-the-wall camaraderie feels forced. Infused with a buzz-killing aura of danger and seediness that can't simply be attributed to the more exotic setting, the scenario focuses on the revelers' warped states-of-mind, in particular that of the new groom Stu (Ed Helms). Remember the bile spewed by his ball-busting girlfriend in the first movie? That vibe predominates.

Reluctant to have a bachelor party prior to marrying Lauren (Jamie Chung) at a lavish Thai resort, Stu explains, "I'm still putting the broken pieces of my psyche back together." Good luck with that one. Phil (Bradley Cooper) is pissed off at the prospect of not being allowed to cut loose, and Doug (Justin Bartha) is preoccupied with convincing Stu to invite his brother-in-law Alan (Zach Galifianakis) to the wedding. Alan's plus one turns out to be none other than Mr. Chow (Ken Jeong). A scene-stealing Capuchin monkey with an oral fixation takes the place of the first movie's baby.

As before, the raucous night in question is a blank the guys must piece together the morning after while the clock ticks down to the ceremony. Lauren's little brother Teddy (Mason Lee), a cello prodigy and surgeon-in-training at Stanford's med school, sustains the most wear-and-tear if you don't count Stu's encounter with a tattoo needle and one other, potentially more harmful, probe. The guys get mixed up in a crime deal that affords cast addition Paul Giamatti a small but juicy chance to play the scary nebbish. It also opens the door to gunplay and an exciting chase through the streets of Bangkok.

Overall, The Hangover Part II doesn't trigger nearly as much deep or spontaneous laughter as the raucous original—it's amusing mainly as a blockbuster curio where we're really watching the filmmakers' and Warner Bros. struggle to make a worthwhile sequel. But by opting to expose the damage the boys have sustained, the film renders them with less appeal. Alan is now off-puttingly certifiable: too dumb, deluded and nasty to be loveable. Stu snivels, and handsome Phil is more piggish than charming.

For its part, the production showcases the scenic appeal of Thailand while also vividly evoking the sticky underside of Southeast Asia's version of Sin City. The result is not a harmless lark but something more akin to a reminder that the line between comedy and tragedy (and horror) is easily crossed. If The Hangover Part II were more entertaining, it would deserve a toast. Instead, this glass is half full.