close
The Alpha and Omega, in more homespun terms. 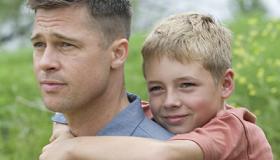 Much like Stanley Kubrick's landmark 2001: A Space Odyssey (to which it will invariably be both fairly and unfairly compared), Terrence Malick's hotly-anticipated The Tree of Life should be fodder for considerable artistic and philosophical debate for many years to come, leaving its proper place in film history more at the mercy of indeterminate longevity than the immediacy of box office or even knee-jerk critical reaction. Aggressively impressionistic and unapologetically spiritual, Malick's long-gestating meditation on the meaning of life is, if nothing else, a singularly original and deeply personal film—a growing rarity in American cinema—with which Fox Searchlight should sustain a long and prosperous platform release well through the summer, provided they are able and willing to meet the considerable marketing challenges ahead.

Bravely taking its title from the symbol that prominently bookends the Christian Bible, The Tree of Life, only Malick's fifth film in nearly 40 years, boasts a structure that is simultaneously simple and complex—a pastoral family drama at the core of a grandiose cinematic symphony suggesting from the start that the most profound truths in the universe may in fact reside in the small, mundane details of life so often taken for granted. For the O'Brien family, life is not so different than it is for most other Southwestern families in the 1950s. Mr. O'Brien (Brad Pitt) aims to secure a disciplined upbringing for his three boys (newcomers Hunter McCracken, Laramie Eppler and Tye Sheridan), while his wife (Jessica Chastain) feels no obligation but to love them in whatever capacity they individually allow. Those dual paths—the film declares them the paths of "grace and nature" early on—define not only the lifelong struggle of the eldest son, Jack (McCracken as a boy, Sean Penn as a man) but indeed the very essence of free will itself. Yet the question begs to be asked: is there meaning or even purpose to free will? In Malick's world there most certainly is, and it is here that he asserts what may prove the picture's most divisive conceit, that of a higher being whose love and divine authorship invests every facet of human existence with meaning and purpose. While this is hardly the first time Malick has shown interest in such themes, it is clear that the ongoing chaos of a post-9/11 world in which the meaningful and the spiritual are increasingly set at odds has given him pause, if not renewed vigor to evangelize a 30-year-old script which may well be more timely now than ever.

Free flowing detours into the characters' thoughts, dreams and fantasies, including a prolonged sequence detailing the creation of the universe and earth (complete with Jurassic Park-style dinosaurs) leave no question as to the presence of a central mover whose omnipresent hand guides the actions of all things living and inanimate. More subtle is the film's stylistic bifurcation—surreal, dreamlike sound design and a camera that never stops moving except to call attention to things small and beautiful, and even then only from a vantage no human could hope to share. From a purely technical standpoint, it makes for one of the most audacious aural and visual works of the last half-century, boasting Oscar-caliber work not only from previous collaborators like cinematographer Emmanuel Lubezki and production designer Jack Fisk, but from a virtual army of sound and picture editors whose work here is stunning.

The Tree of Life won't ultimately be remembered as a technical exercise, but as a philosophical treatise, precisely the kind of heady, ambitious effort Malick fans have long awaited from the former Harvard philosophy student and MIT philosophy professor. Indeed, one need not necessarily be religious to appreciate the film's finer points—though its affirmation of faith and the transcendence of the human soul bear an unmistakable Judeo-Christian imprint, the film's overarching message is a universal one of love and human dignity. At the same time, that message will get little acknowledgement from those who spurn didacticism in cinema, preferring their movies to be more linear and accessible. As they have in the past, Malick's habitual detractors will show little interest in or respect for his achievement here, once again subjecting The Tree of Life to the same haughtily dismissive intellectualism with which their set has eviscerated Malick's previous films, and for essentially the same reason: because they see no compatibility between the cerebral and the spiritual. To suggest otherwise is tantamount to intellectual heresy, making the press-shy Malick an easy bête noire.

Here, perhaps, is where the Kubrick comparisons are most apt. For despite the obvious similarities of character—reclusiveness, quiet intellectualism, overt rejection of stylistic and narrative conventions and a habit for working infrequently and obsessively—the dissimilarities are even more glaring: Malick's warmth and humanism exist in stark contrast to Kubrick's cold senses of irony and cynicism. Kubrick's passing left one major void which, to date, only Malick has been able to fill—that of a homegrown auteur with the courage and the capacity to challenge prevailing Hollywood maxims and not be run out of town.

As for the films themselves, there's little question that 2001 and The Tree of Life both seek to ambitiously tackle similar themes and concerns. Both proclaim the existence of an otherworldly power guiding human events, even going so far as to construct elaborate evolutionary prologues to support their respective views and place mankind in its appropriate historical, evolutionary and metaphysical context. But where Kubrick was concerned with humanity's destination, Malick is preoccupied with humanity's condition. There is no rule that says cinema cannot be grateful for them both, though for the world of today, it may be Malick that is needed the most.