close
The drunken boxing movie gets a CGI upgrade in this enjoyably sloppy martial arts film. 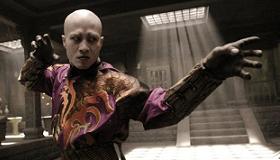 A vigorous if unfocused riff on the "Drunken Boxing" martial arts style popularized by Jackie Chan in the 1978 film of the same name, veteran choreographer Yuen Woo-Ping's first directorial effort in 7 years hums with good cheer, devoting at least one third of its time to excellent fight sequences of one kind or another. The simple story—two blood brothers at war, one pure and the other evil—depends less on real narrative progression than an anything-goes sensibility. Bridged by rude comedy familiar to veteran viewers of Hong Kong martial arts cinema, True Legend is refreshingly unpretentious in comparison to the pompous nationalism of recent Chinese war spectacles like The Warring States. Still, its appeal will largely be limited to Chinese audiences and martial arts devotees.

Courageous warrior Su Can (Man Cheuk Chiu) rescues his prince from a situation as dire as any in Indiana Jones and the Temple of Doom. Rewarded with a prospective governorship, Su turns it down in favor of continuing his martial arts studies, leaving malevolent adopted brother Yuan Ying (Xun Zhou) in charge. Su's father killed Yuan's father for abusing his knowledge of the "Five Venom Claws," which transform the user's hands into bursting, green-veined, CGI-enabled monstrosities, whose every scratch injects deadly poisons. Yuan comes seeking revenge five years later, having mastered the claws himself, and despite his expert martial arts training Su's unable to defeat him. Washed downstream with his wife, Su heals his torn muscles and begins learning a new way to defeat Yuan: drunken boxing.

True Legend's big twist on a well-known story is that Su really does get drunk to learn his new style: drinking himself into a hallucinatory stupor on isolated hills, he learns a new way of ducking-and-weaving, a fluid style that throws his opponents off-balance. (His tutors are mountain spirits only he can see: whether or not they're just visions induced by getting drunk and hitting himself in the head remains unclear.) Former general Su gets many chances to return to glory, but his addiction—the source of his new, seemingly unbeatable style—keeps him perpetually marginalized, grimy and disreputable. Meanwhile, every smashed wine bottle—conveniently arrayed around every big fight after Su learns his new style—only adds to his strength.

Sticking to his strengths, Yuen (choreographer for both The Matrix and Crouching Tiger, Hidden Dragon, and the director of the original Drunken Master) offers up plenty of wire-work, elaborate mass fights (the opening is almost up to the standard of the "Crazy 88" fight sequences of Kill Bill Vol. 1, yet another sequence Yuen supervised) and general mayhem. The CGI-enhanced combat, barring occasionally shoddy background work, is touched up without distracting from the choreography. (After an unsuccessful release abroad with twenty minutes of the film in 3D, the film is being released flat here.) The irreverent presentation of champion fighter as alcoholic, while one-note, is a pretty good joke.