close
Who you calling “mutant,” Castro? 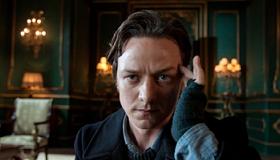 When X-Men opened in 2000, it kick-started Hollywood's ongoing superhero obsession. Shrewdly X-Men: First Class starts with the exact same scene that introduced moviegoers to the to-date $786.5 million dollar franchise, but then takes the mutants' exploits in an all-new direction. In this effective if unengaging reboot, director Matthew Vaughn (Kick Ass)—a technician as self-congratulatory as he is competent—shepherds Professor Xavier and his band of beleaguered outsiders through an origin story of sorts while setting up a new film series that actively strays from the established mythology of the original trilogy. Even with stiff competition from Super 8 and Green Lantern in the two weeks following its release, expect First Class to do well as both a standalone adventure and a set-up for future installments, while earning a dedicated following on home video as one of the more satisfying comic book films of recent years.

James McAvoy plays Charles Francis Xavier, a charming and gifted young college graduate living in 1960s upstate New York who happens to possess the power to read and manipulate people's minds. When a CIA operative named Moira McTaggert (Rose Byrne) recruits him to help hunt down warmonger Sebastian Shaw (Kevin Bacon) and his henchwoman Emma Frost (January Jones), Xavier takes command of a group of young mutants that includes shape-shifter Raven Darkholme (Jennifer Lawrence), an acrobatically-gifted scientist named Hank McCoy (Nicholas Hoult), and-most pivotally-Erik Lehnsherr (Michael Fassbender), a concentration camp survivor who can control metals. But when the misfits get tangled up in the Cold War, Xavier enlists his charges to use their powers to fight evil, even as they struggle with protecting a human race that treats them with fear and hate.

It's a brilliant idea to transplant superhero stories onto the details of actual history—especially a political quagmire like the Cuban Missile Crisis—but X-Men: First Class seldom manages to make its universe feel real, much less really exciting. Although the film makes requisite use of Booker T. & the M.G.'s swinging "Green Onions" and a few of the female characters wear costumes that could blend in at one of Hugh Hefner's Playboy Clubs, all of the locations look as new and untouched as, well, studio sets. And Vaughn's commitment to period detail frequently takes a back seat to anything that looks "timelessly" bad ass. But because these are earlier iterations of well-established characters, Professor X and Magneto's travails and theologies feel telegraphed; just as we never again need to see Superman land in Kansas or Peter Parker get bitten by a spider, the rift between Xavier's Martin Luther King Jr.-style peacebroker and Magneto's Malcolm X-esque revolutionary feels inevitable rather than earned.

What the film does well, however, is grasp the tone and rhythm of the original comic books. Vaughn creates a story that seems like it could come out of the funny pages, offering small, engaging subplots and just enough seriousness that the whole thing doesn't seem silly. He combines the monolithic iconography of Stan Lee and Jack Kirby's original X-Men with the eclecticism of Chris Claremont's "second squad," even as the film aspires to an intensity that the material never conveys—especially since anyone with a passing familiarity with the mutants' mythology (not to mention U.S. history) already knows what's about to happen. (And the staccato strings of Henry Jackman's score are so overused that we're numbed to their intended suspense.)

As Xavier, Magneto and Mystique, the three characters audiences care about most, McAvoy, Fassbender and Lawrence command the screen and mostly manage to navigate around the limitations of their make-up or costumes. That said, someone needs to make the executive decision just to give up and give Mystique normal eyes, because Lawrence's contacts rob her of an essential expressiveness and undermine the palpable emotion in her voice. Unfortunately, with the exception of Nicholas Hoult's understated turn as Hank McCoy (aka Beast), the rest of the characters either feel like lazily re-imagined versions of the first four X-Men movies' heroes and villains, or people unimportant enough to get an individual identity at all.

As a director, Vaughn exudes more confidence than personality, and although the flourishes in his film are intriguing, there's no getting around the fact that the main drama lacks important details. He can have characters quote Robert Louis Stevenson all he wants, but no way would these burgeoning mutants master their powers in—literally—a week. But while X-Men: First Class isn't The Dark Knight (or even Batman Begins), it's no disaster—a small miracle in itself given the reported production problems—and its streamlined effectiveness surpasses the ruthless efficiency of the series' previous installment. In that regard, First Class is ultimately a success, because not only does it reward fans, but it redeems a series that, for better and sometimes worse, gave the superhero genre its start.