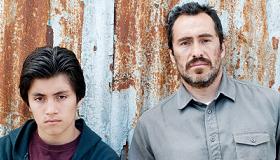 The timing is right for this remarkable and riveting family drama which puts a human face on the hot-button topic of immigration in such effective and emotional terms that you may never look at the subject in the same way again. This story of a struggling gardener trying to keep his teen son out of gangs never compromises in the name of sentimentality and offers an Oscar-worthy performance from Demián Bichir that could make this a possible summertime sleeper hit. With Summit Entertainment giving it the same June 24th release slot they gave their 2009 Best Picture winner, The Hurt Locker, there is every possibility discerning adult audiences tired of typical warm weather fare will discover this extraordinary gem. Awards attention could take box office and DVD returns much further, but the film remains a marketing challenge outside of target Latino audiences.

Carlos (Bichir) is just the kind of guy you drive by without really seeing: a conscientious father and dedicated worker who lives day to day, trying to make a new life for himself and his sullen teenage son Luis (José Julián in a remarkable film debut). Seeing that the best way to succeed in his gardening business is to own his own truck, he reluctantly looks to his sister (Dolores Heredia) for financial help. Now with a brand new truck and tools, he picks up day laborer Santiago (Carlos Linares) on the road to help him on a big job in the swankier side of town. As he climbs a tall palm tree, he notices his helper has grabbed his keys and is stealing the truck. In a devastating series of scenes we see his despair as he goes to his son for help in tracking down the thief. What ensues is not only the gripping story of how Carlos tries to get his life back together but also a moving father/son story, certainly a familiar one for illegals like Carlos who desperately try to keep their kids out of trouble while they work against all odds for A Better Life. This conflict between dad and son is believably told and heartbreakingly real.

Director Chris Weitz, working from a beautifully nuanced screenplay by Eric Eason (story by Roger L. Simon) has crafted an always-watchable drama that hits you in the heart and the gut, exposing you to the plight of people so often reduced to statistics. Bichir says more with his facial expressions in one scene than most actors do in entire movies. This fine actor clearly understands every aspect of Carlos and delivers a devastatingly authentic and moving turn. Equally fine is Julian in his first role, expertly emulating the frustrations of a kid hanging on to his family while he's pulled by bad peer influences. Acting doesn't get much better than this and A Better Life offers the best we've seen all year. This is a must see for anyone who cares about great movies. It has the ability to change hearts and minds.