close
Goonies in the hood 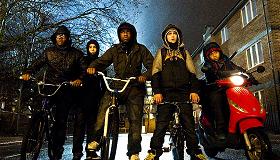 When aliens drop in on a North London housing project, the only line of defense against the extraterrestrial invaders is a group of teenage hoodlums in Joe Cornish's inspired sci-fi comedy, Attack the Block. Cornish is set to make a big splash this fall as one of the writers on Steven Spielberg's The Adventures of Tintin: The Secret of the Unicorn, but he establishes his own filmmaking bona fides with this impressive debut. A hit at both South by Southwest (where it made its U.S. premiere) and at San Francisco's Another Hole in the Head film festival, Attack the Block may emerge as one of the summer's sleepers. It's not for nothing that Nick Frost (Hot Fuzz, Paul) is part of the cast and Edgar Wright (director of Scott Pilgrim Saves the World) is an executive producer, and it's no coincidence that Cornish had bit parts in Shaun of the Dead and Hot Fuzz. Fans of those movies will seize onto this dark comedy and box office prospects are promising, particularly after word of mouth takes hold.

It's Harry Brown meets War of the Worlds, or a less claustrophobic Attack on Precinct 13 with space creatures instead of felons. For teen gang leader Moses (John Boyega) and his pals, aliens are just one more curse in an already tense night replete with run-ins with the police and with Hi-Hatz (Jumayn Hunt), the violent thug who deems the block his fiefdom. But it's the boys' block, too, even if it's a neighborhood the rest of London avoids and where most residents lock themselves inside after dark (granted, because Moses' crew will jump them). Regardless, these kids are going to defend their turf.

Other than Hi-Hatz, only a few adults dare brave Attack the Block. There's a pair of stoners, Ron (Frost) and Brewis (Luke Treadaway), and then there's Sam (Jodie Whittaker), the nurse Moses mugged just today. The teens' characters emerge through their relationship with the nurse, even more than through their battle with the aliens; their masks literally and figuratively slip to reveal the vulnerable kids beneath the bravado. Among a solid ensemble of first-time actors, Boyega as the natural (and angry) leader and Alex Esmail as the motormouth Pest are the standouts.

The characters (which includes the block itself) are strong: the simple, elegant, and appropriately scary creature design—all fur, no eyes, and a maw of glowing teeth—is ingenious, and the story nicely balances tension and comedy. Above all, Cornish's idiomatic dialogue is hilarious and the longtime comic's sense of timing is perfect. As Pest might say, when it comes to witty banter, Cornish has mad skills. This small movie is hugely entertaining and a bracing alternative to the typical summer blockbuster behemoths.