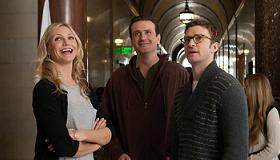 Filthy and unredeeming in all of the right ways, Bad Teacher is a worthy successor to the benchmark black comedy Bad Santa (without being at all the same). Coming off a supporting turn in Green Hornet, Cameron Diaz reclaims her star-wattage as the sassy, scheming title character who wants a boob job to attract her cute colleague. After Bridesmaids brought in over $100 million in May, audience appetites seem hungry for female-driven fun, especially as counter-programming to opening-weekend competition like Cars 2 and Green Lantern's second week of release.

Diaz plays Elizabeth Halsey, a gold-digging substitute teacher who heads home from her last day of classes—ever—to discover that her milquetoast, millionaire fiancée brought in his mother to break them up. With no other place to go, she returns to "work"—a word that's a stretch since she spends her class day sleeping, showing her students inspirational-teacher movies and scheming how to land a man with enough money to quit her job for good. When new teacher Scott Delacorte (Justin Timberlake) turns out to be filthy rich, Elizabeth vows to buy herself breast implants to win his attention. How to save up the cash for a sweet rack? Help her students cheat on a highly-competitive achievement test.

What undermines most black comedies is the filmmakers' need to redeem their protagonist, or at least to make them sympathetic. Thankfully, director Jake Kasdan (Walk Hard) keeps the proceedings painfully mean-spirited from start to finish: Elizabeth's goal isn't learning to love her small boobies and smaller bank account—it's buying boobies big enough to land a rich husband, by any means necessary. Yet Kasdan makes us want Elizabeth to succeed by creating Amy Squirrel (Lucy Punch), an adversary even more unlikeable than Diaz's rude, ruthless school marm. Squirrel is the kind of sweet-faced fiend who masks her condescension with a cheerful smile and Punch maximizes her character's needling passive-aggressiveness, much to the film's benefit.

As Elizabeth's two potential suitors, Scott (Timberlake) and Russell (Jason Segal) define the difference between a "good" catch and the "right" catch. Ceaselessly well-intentioned as he is, Scott is just clueless enough to supply every signal that he's totally wrong for Elizabeth, while Russell's caustic humor, patience, and perhaps most importantly, indifference to Elizabeth's bad behavior makes him an imminently more suitable candidate for her affections. Segal's mock-incredulousness at the description of a map-less car ride (trust me) will have the audience in stitches, but the dry humping session that culminates Elizabeth's efforts to woo Scott feels destined to be a bring-the-house-down movie moment.

Timberlake has shuffled through many memorable supporting roles, but here he really defines himself as a multidimensional performer, smart enough to understand his character's (and his own) appeal, but savvy enough to play against it. And Russell isn't simply a polar-opposite alternative to the trim, squeaky-clean Scott; he's a smart, complex and deeply funny guy, and Segal gives his doughy gym teacher enough gravitas to be worthy of our attention, and hers.

A game supporting cast including Phyllis Smith, John Michael Higgins and Dave "Gruber" Allen expands the film's ensemble of grade-school caricatures and character types, tapping into a wellspring of corny humor and crass payoffs that, like the set-ups in Bridesmaids, shouldn't scare off female viewers. But after lackluster comedic turns in Knight and Day and Green Hornet, Diaz makes the most dynamic impression, proving she can be as snide as she is sweet. Kasdan continues to carve out a place for himself among the industry's best young directors—he knows what the material needs, not simply what the audience demands. If its success follows in the footsteps of Bridesmaids, Bad Teacher could herald a renaissance of worthwhile women-filled comedies. Regardless, it's terrific and will teach the industry a master class in what's funny in 2011.