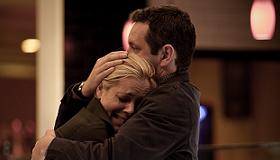 The now-familiar story of a couple surviving the grief of a child's death receives a brave new treatment in director Shawn Ku's Beautiful Boy, one of the few such pictures that successfully contextualizes its tragedy with urgency and emotional rawness without crumbling into maudlin melodrama. Oscar-caliber performances from Michael Sheen and Maria Bello will likely go unacknowledged at awards time, because distributor Anchor Bay typically treats its theatrical releases as low-key lead-ins to its core home entertainment business. Expect tepid returns from a brief theatrical release as per usual.

Their marriage already strained under the usual array of mid-life pressures, Kate and Bill (Bello and Sheen) are thrown into further emotional disarray when word that a rampage suicide shooter has killed students at the college their son Sammy (Kyle Gallner of TV's Smallville and CSI: NY) attends. If Sammy isn't the one last thread holding them together, he certainly becomes that thread for several tense minutes as they desperately try to confirm his safety and whereabouts. It's only when the police show up at their door that the savage truth presents itself—Sammy was the shooter.

The ninety minutes that follow are brutal, honest, difficult and profoundly affecting in ways that movies rarely ever are. As Kate and Bill struggle to make sense of Sammy's actions they find themselves unexpectedly drawn together, violently pushed apart, repeatedly forced to question themselves and each other, bewildered by life, beset by guilt and haunted by repeated second-guessing of what they might have done wrong in the rearing of their deeply troubled son.

Director Shawn Ku—a former dancer and choreographer whose only previous directing effort was the MTV movie The American Mall—shows an astonishing aptitude for exploring the less obvious emotional tangents of the tragedy—the words that typically go unsaid the private, quiet moments of doubt, grief, shame and anger are rarely glimpsed outside the reflection of a vanity mirror. It's a harrowing journey somehow made palpable by the recognition that two of the greatest living actors are operating at peak capacity in the process. For Sheen, who has seen his star rise precipitously over the last several years with marquee performances in such films as The Queen and Frost/Nixon, this is hardly a surprise. But for the chronically underrated Bello, whose performances in such films as A History of Violence, The Cooler and World Trade Center have repeatedly failed to push her to the next level, it's a sobering and somewhat melancholic reminder of just how astonishingly good she really is.

Obvious similarities to two Oscar-nominated films from 2010—Blue Valentine and Rabbit Hole—may end up inadvertently handicapping Beautiful Boy with a certain level of audience "sympathy fatigue," even though Shawn Ku's film is, in many respects, the superior effort. Long term, however, this may prove to the picture's advantage given that Anchor Bay tends to be a more attentive steward of catalog titles than the major studios. Nonetheless, as summertime counterprogramming, Beautiful Boy is a discerning film lover's off-season tonic, regardless of where, when or how it's seen. What matters most is simply that it be seen.