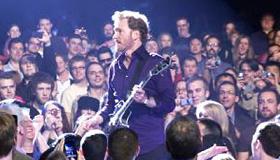 Conan O'Brien is one of the funniest men to ever host a television program. It was his downfall. Whether his quick and clever brand of Harvard-honed comedy makes him "one of us" or "one of them," his job as host of NBC's venerated Tonight Show ended with one of the most bizarre and riveting on-air train wrecks in television history. After hosting the show for seven months, its back end dominated by flailing network suits scrambling to salvage the results of their poor decision-making, O'Brien was given $45 million and shown the door in January 2010. Unemployed and prohibited from making television appearances until May of that year, O'Brien went on a 32-city tour that included musicians, comedy writers, a full road crew and documentary director Rodman Flender. In Conan O'Brien Can't Stop, Flender whittles 149 hours of rehearsal and tour footage into a fast-moving and gut-busting dispatch from the front lines of pain management, as the late night comic attempts to overcome his anger the only way he knows how. The story is still fresh enough to generate some cultural interest, so it should attract curiosity seekers along with Team Coco members. Long term ancillary success is guaranteed.

More than just a jocular account of a musical comedy revue, Conan O'Brien Can't Stop is a snapshot of a unique man's psyche at a very peculiar moment. Obviously wounded from having his long held dream cruelly and publicly snatched from him, O'Brien channeled his negative energy and need to perform into the nationwide "Legally Prohibited from Being Funny on Television" tour. Its purpose was to buck up O'Brien's fan base and keep him from exploding in rage and heartbreak, emotions that drive many of our funniest comics. "Sometimes I'm so mad I can't even breathe," O'Brien says. It's one of the more candid comments Flender includes in a cleverly-edited doc that doesn't traffic or revel in the shock of quotable bitterness. Nor does it care to psychoanalyze or provide O'Brien a platform for righteous venting. Instead, the tossed-off acknowledgments of genuine hurt are judiciously peppered throughout, allowing evidence to accumulate that the comic is dancing as fast as he can—lest he slow down and let the pain seep back in. These small, captured moments are where the film works best. The high of performing mixed with the tour staples of fatigue and boredom can wear down the façade of any performer, which allows Flender to catch O'Brien at his most unguarded. Splayed out on a cross-country series of dressing room couches, the Brookline, Mass. native gets incrementally testier about his numerous off-stage responsibilities, many agreed to without his knowledge or consent. Even for a performer as sociable as O'Brien, glad handing radio contest winners and fawning celebrities gets exhausting. It's exasperation he expresses with a bile-tinged wit that is sometimes directed at confidantes like his assistant Sona Movsesian, who would probably be withered by such jabs if they weren't so damn funny.

Wit (for good or ill) is an apt word for O'Brien's comedy; it implies a more evolved strain of comedic thought, which is on full display here. O'Brien, whose speed and incisiveness is almost otherworldly, never looks happier than when he's kicking around ideas with head writer Mike Sweeney, sidekick Andy Richter and other creative contributors. They rewrite Willie Nelson's country classic "On the Road Again" as "My Own Show Again" (sample lyric: My own show again/On any network even Oxygen). Lounging backstage he ad-libs an imaginary letter written to him by Jay Leno: "What's it like to have a soul?", Leno supposedly asks. Such coastal humor might not have been the best fit for a broad 11:35p audience, although we'll never know with certainty as O'Brien swiftly fell victim to (partial list) sluggish ratings, affiliate revolt and Leno's disastrous 10p show. Monday morning quarterbacking aside, NBC's 2004 announcement that five years hence Leno would relinquish the Tonight Show to O'Brien was not completely daft. By 2009, Leno would be almost 60 years old, cracking wise for an older audience who'd have little desire to stay up until 11:35p. O'Brien, starting to get antsy at 12:35a, was younger and spoke to an advertiser-coveted, 18-34 crowd that would be loyal to him for at least a couple of decades. From this simplistic, though not unjustifiable, premise came a series of epically misguided, panic button-mashing decisions that stemmed from Leno's Gibraltar-like ratings dominance. When time came for the long ago agreed-upon handoff, NBC was in the torturous position of having to dump the number one host in late night for an untested 11:35p commodity. Flender wisely spends as little time as possible recapping the high level contretemps, relying on a short film by the popular Taiwanese animation house NMA. Those interested in a full account of the affair are advised to read Bill Carter's excellent book, The War for Late Night.

As the possibility of his exit reached escape velocity, some unfairly claimed that O'Brien should just be happy with his Powerball-level payout. Those people obviously never labored so mightily to fulfill a lifelong ambition that all the money in the world couldn't assuage the pain of failure. O'Brien actually had it worse: like a trusting soldier, he patiently waited his turn to host The Tonight Show when he easily could have bolted, only to have his dream die a slow and excruciating public death. All this doesn't mean the brilliant former Simpsons scribe was the right choice to shepherd the Tonight Show franchise. In honesty, he probably wasn't and the ratings bear that out. Americans either watch a television show in sufficient numbers to justify its continued existence or they don't. Massage the numbers any way you like, but America didn't tune in, and with too many other self-inflicted wounds to treat, NBC couldn't wait for the show to have its Hugh Grant moment. How much venom the whole dirty business added to O'Brien's quotidian levels of sarcasm is not addressed in this film, although we wonder how often he socked staff members in the arm before the NBC debacle. What comes across even more forcefully than the host's lingering resentments are his talent, energy and, a bit surprisingly, his warmth. His knack for self-deprecation endears him to us as much as his appreciative acknowledgment that the tour represents the first time in his career that people have paid money to see him. These emotional grace notes, along with the great music (performed by the likes of Jack White and Eddie Vedder), mitigate issues that might stem from the doc's built-in repetitiveness. Like its subject, the terrific Conan O'Brien Can't Stop lives in that critical space between past and future, where a gifted performer manages to concoct an effective way to process and, as much as possible, move beyond his well-publicized troubles.

Note: Mark Keizer was Senior Producer of NBC's Later with Greg Kinnear, the talk show that aired after Late Night with Conan O'Brien from 1994-1996.