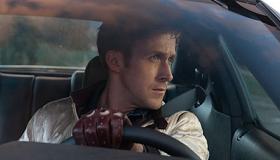 Drive dynamically merges a terrific film noir plot with a cool retro look, evoking '60s classics like Point Blank and Bullitt. Ryan Gosling plays a Hollywood stunt driver by day and getaway driver by night. Directed with flair by Danish filmmaker Nicolas Winding Refn (Pusher, Bronson), this tough as nails picture is sometimes ultra violent but its interest in character-driven story will help it please both hardcore action fans and the art crowd. It received a 15-minute ovation at its Cannes premiere, and Refn won Cannes' 2011 Best Director Prize for it. Box office returns should be sweet if distributor FilmDistrict can find a way to market to both potential audiences. Awards attention for the September release could help the cause.

Simply named, Driver (Ryan Gosling) is a man of few words. His only niche is behind the wheel of a car. With talent like his, manager and long time friend Shannon (Bryan Cranston) promotes Driver wherever he knows a job is waiting, whether the job is stunt driving on a Hollywood set or a playing getaway driver for criminals. Shannon's latest plan involves funding a professional stock car that Driver can take on the circuit. Enter shady entrepreneurs Bernie Rose (Albert Brooks) and even shadier cohort Nino (Ron Perlman) who agree to fund the plan. Meanwhile, loner Driver falls for literal girl-next-door Irene (Carey Mulligan), a neighbor in his apartment building. Soon he's involved and looking after her young son, Benecio (Kaden Leos). Things gets complicated when Irene's husband Standard (Oscar Isaac) is released early from prison and Driver's commitments thrust him into a new, even more dangerous world.

With the sensibilities of a European auteur, Refn brings unique rhythms and a pulsating energy to Hossein Amini's tight, spare screenplay, based on the James Sallis short novel. Aided by Newton Thomas Sigel's crisp cinematography and an unusual use of songs and score, Refn creates a noir Los Angeles like no other we've seen. The music is key, as Refn isn't afraid to let whole songs play out while his main character drives the city streets in tune with the sounds from his CD player. It seems to be a key component in the everyday life of this mysterious man reminiscent of early Eastwood or McQueen.

Gosling, an actor who takes risks onscreen, finds his signature role in Driver and delivers a full-bodied, if restrained, portrayal that lingers in memory. Mulligan's Irene is a nice counterpoint to the mean streets Driver travels and their relationship is refreshingly offbeat. Among the strong supporting cast, Isaac has some nice moments as does Cranston, but it's Brooks that takes a complete career departure that pays off big for the against-type casting gambit. A Best Supporting Actor Oscar nomination seems assured.