close
Let there be light! Eh, not so much. 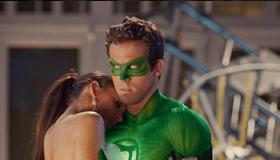 This long-gestating screen adaptation of The Green Lantern, DC Comics' poor cousin to better known Batman and Superman franchises, boasts strong CGI effects, Ryan Reynolds' as a spirited and buff leading man and some nice aerial stunts, but it gets bogged down by a plot that borders on the absurd. The convoluted story circles around the elite aliens known as the Green Lantern Corps, a 3,600 warrior force who recruit their first human being to defeat the evil Parallax and restore balance to the universe. Warner Bros hopes enough fanboys will soak up this hokum so they can recoup what has been reported as a $300 million production and marketing price tag. Opening box office should be bright enough, but indifferent word of mouth and killer summer competition could quickly shut off the lights.

The Green Lantern was created in 1940 and has slunk along for seven decades without his own Hollywood film. There's probably a reason. A gaggle of screenwriters plus director Martin Campbell (Casino Royale, GoldenEye) can't seem to find a way to make this celestial cop compelling, even with all the technological advances available to translate the comic book's vision to film.

After a prologue setting up the inter-galactic struggle between the benevolent Lantern Corps and the evil Parallax (a CG monster who looks like a calcified squid), the film switches to the present day travails of hot-shot test pilot Hal Jordan (Reynolds). Brave but reckless, Hal nearly causes a catastrophe with his careless flying antics and is fired from his job. Though he acts fearless, Hal is haunted by the death of his pilot father, a childhood trauma the Green Lantern honchos find attractive, so they summon him via a magic green ring for training. They aim to prepare him for the ultimate battle against the terrifying force out to cause havoc in the universe and defeat the Corps once and for all. Of course they don't trust humans, but find they need some humanity to accomplish their goals.

Visual effects aside, the film's lack of sophistication starts with its premise. Hal tries to unlock the secrets of a flashing green lantern in his living room by saying hokey phrases at it—what is it, a genie? Of all the methods for obtaining super-powers—getting bitten by a spider, engineering wild gadgets, genetic mutation—blathering at an inanimate object is the least refined. Call it corny—or better, call it "green."

The picture works when Reynolds returns to earth (apparently it's pretty easy to commute between planets) and shares the secrets of his newfound superherodom with his incredulous childhood sweetheart and fellow pilot Carol Farris (Blake Lively). It's here he also faces Hector Hammond (Peter Sarsgaard), a demented scientist who seems to be taking cues from Parallax plus his sleazy politician father (well played by Tim Robbins). The main event is, as ever, The Ultimate Showdown Between Good and Evil. The film, released in both 2D and 3D, delivers lots of freshly minted CGI'd action (eventually) but none of it grabs you. There's just something too synthetic about the whole enterprise—it's fantasy tipped over into fakery.

That green suit and mask fit Reynolds like a glove; he's perfectly cast in the lead and lightens things up when needed. Yet, as an action hero, he's a bit insubstantial. Lively lives up to her last name with a take-no-prisoners attitude that's attractive and winning. Mark Strong makes a good impression as the Lanterns' leader Sinestro, while Sarsgaard has a field day as the mad scientist. Angela Bassett is wasted as another scientist and government worker.

A bit during the end credits sets up the mandatory plea for a sequel but it will take this cinematic superhero a lot more than a magic ring to get a second chance.