close
I'd rather be at summer school

Judy Moody And The Not Bummer Summer 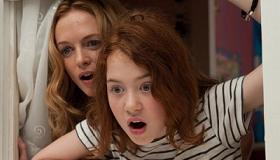 This ho-hum offshoot of Megan McDonald's book series earns negative "thrill points" as it chronicles the mirthless backyard shenanigans of a suburban Pippi Longstocking. Aimed at preadolescent girls, the tame effort skews even younger and brings little novelty to the tween screen genre. (Casting naïf-like voluptuary Heather Graham as Judy's free-spirited Aunt Opal doesn't count, since she'll rev the wrong engines.) Judging by the muted reactions of the children at one New York screening, Judy Moody and the Not Bummer Summer will perform in line with recent comparables such as Ramona and Beezus. In other words, this title doesn't forecast a blockbuster season for distributor Relativity Media.

In a previously unpublished scenario co-written by McDonald, precocious carrot-top Judy (Aussie Jordana Beatty) faces the prospect of a less-than-scintillating vacation when her two closest friends embark on exotic adventures (Rocky to circus camp and Amy to Borneo) and her parents are called to California. Left behind with her little brother Stink and nerdy pal Frank, she devises a competition to see who can amass the most "thrill points" over the break. Thwarted at every turn, whether by Frank's blue rollercoaster-induced vomit or by Aunt Opal's (Graham) bad driving, Judy discovers she already possesses the ingredients necessary for adventurous good times. Along the way, she concedes that Stink's quest to capture Bigfoot isn't as lame as she first thought, and she solves a puzzle her teacher (Jaleel White, aka Urkel from TV's Family Matters) posed on the last day of school.

In his effort to render Judy Moody exciting and perhaps mimic its male counterpart Diary of a Wimpy Kid, director John Schultz (Honeymooners) uses somewhat random animation inserts and overlays to communicate his heroine's daydreams. They don't energize the proceedings and only underscore how difficult it is for live-action movies to compete with animated fare, whether on big screens or small. Judy's signature linguistic quirks seem stilted as well, and it's hard to believe kids will find her old-fashioned phraseology ("super-duper," "double-rare") the least bit cool. In general, the jokes miss their mark and most of the child performers overact. Graham, in contrast, delivers a low-key performance and thus doesn't wear out her "I'm-so-wise-and-wacky" welcome.

It's unfair to criticize a kiddie pic for being wholesome (minus toad pee and animal-poo), but nowhere is it written that it must be dull and derivative. No doubt, Judy Moody and the Not Bummer Summer is stuck in between age groups, yet demographic challenges needn't result in a trade-off between innocence and imagination. Naturally, we don't want kids to grow up too fast; on the flip side, we should be mildly concerned if huge numbers of them find this movie wildly entertaining.