close
Worth much more than a passing grade 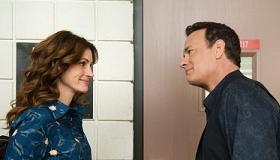 In a marketplace crowded by fan boy infatuations, Larry Crowne wants to romance adult moviegoers. This charmer about late middle-aged renaissance is pertinent for these times and a perfect summer comedy for grown-ups looking to escape robots and superheroes. Flashing their superstar wattage, Julia Roberts and Tom Hanks (who also co-wrote and directed) make a dream team and should prove a slow but steady draw despite the monster competition. Look for decent, though not blockbuster, numbers and a solid afterlife.

Critics may balk at the film's simplicity and optimism, but target audiences should respond to this story of a 50-ish nice guy Larry (Hanks) who's jettisoned from his job at the big-box company he has worked for most of his post-military life. Despite being a model employee, Larry's let go for lacking a college education. So what's a guy to do? He enrolls in community college where he meets jaded teacher Mercedes (Roberts), a beauty enduring a deadbeat marriage, a drinking problem and a general lack of enthusiasm. As he comes out of his shell in her speech class, Larry becomes increasingly attracted to her. Eventually she reciprocates, especially when her online porn-loving hubby (Bryan Cranston) pisses her off one too many times.

Hanks also takes up with a motorcycle club led by the boyfriend (Wilmer Valderrama) of a fellow student (Gugu Mbatha-Raw) with whom he strikes a sweet friendship, centered around her teaching him how to dress, decorate and break some rules. He also gets unsolicited advice from his lottery-winning neighbors Lamar (Cedric The Entertainer) and B'Ella (Taraji P. Henson) and endures a rigid Economics class taught by tough professor (amusingly played by Star Trek's Sulu, George Takei).
Hanks spent years developing the script with co-writer Nia Vardalos of My Big Fat Greek Wedding—the pair began writing even before the economic downturn made their down-on-his-luck good-guy more relevant. But Hanks is too savvy to make a downer; his unique optimism prevails. Clearly, these beloved actors are eager to present themselves as mere mortals worthy of our immediate empathy and deserving of a break. They can't quite erase their luster, but it's okay to forgive these stars for failing to be flawed-or even complicated-human beings since Hanks is mostly interested in making the audience feel good about themselves. And what's wrong with that, cynics?

Roberts has a nice chemistry with her co-star. She hasn't been this appealing in years and more than any other player she really hints at the dark side of her character, but without wallowing-an impressive balance. A scene in a car where she goes ballistic on her husband is priceless Roberts, all hair and energy and that big, broad mouth. Supporting cast is fine, even though Cranston's slacker husbandstrains for credibility and Hanks allows others to go over the top. It's also nice to see exploitation veteran Pam Grier try comedy on for size after decades of guns and attitude. Best of all is Hanks' new best friend Mbatha-Raw, a bright, bossy beauty making her feature debut-now there's a girl worth going back to school for.