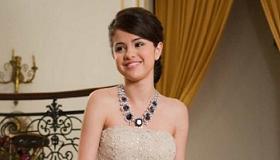 Disney darling Selena Gomez stars in this celebrity impersonation/holiday adventure set in— guess where—Monte Carlo. And with that title, the film demonstrates the little complexity it flaunts as it saunters into theaters July 4th weekend to be Transformers counterprogramming. On the surface Monte Carlo is charming, oddly down-home wish-fulfillment, but it's riddled with unexplored class issues and generic filmmaking. Whatever value it might have had as either travelogue or self-discovery was thrown out in the interest of reaching auds from 8 to 18. Numbers for this one will make the endeavor a worthwhile risk for distributor Fox, but it won't out-dazzle the markup on the sapphire necklace on which the plot turns.

Grace (Gomez) has dreamed of going to Paris all through her emotionally piquant high school career. A good girl with a generous heart, she's waitressed to earn her post-graduation trip to The City of Love, to do only the most generic and obvious things possible. Along with are her best friend and co-waitress Emma (Kate Cassidy, sporting a darling if inconsistent Texan drawl), and—surprise!—Grace's stick-in-the-mud stepsister, Meg (Leighton Meester), who is thrust upon the girls to act as "responsible third party." Their bus tour, "Esprit de Corps," speeds them from landmark to landmark with the frenzy of fleeing rats (any tour of Paris offering 12-minute trips through the Louvre is clearly faking their accents). Catching their breath on the Eiffel Tower, the girls miss their bus and run to a hotel where they're confused for spoiled celebutante Cordelia Winthrop Scott (also played, less-convincingly, by Gomez) and her diva friends. The guilt wears off when the girls are swept away to Monte Carlo for a charity in Cordelia's honor, in which a massive Bulgari necklace will be auctioned to pay for multiple schools in Africa and Romania, and where the three middle-class teens fall sway to the son of the charity founder (Pierre Boulanger), a hot Australian backpacker (Luke Bracey) and fashion. As Emma, Kate Cassidy's pop pedigree (she's the daughter of singer David Cassidy and model Sherry Williams) shows most when she's dolled up in Dior.

I'm all for travel-ventures and definitely for teen catharsis, but Monte Carlo is about as good for girls as The Princess Diaries. Next to all this totally awesome glitz, it's "be happy with who you are" philosophy is as convincing as Selena Gomez's British English. And if Grace had to waitress tirelessly to go abroad, how could her parents spontaneously upgrade three girls to first class? Whatever. For as central as money is in this film, it's all theoretical, and kids don't learn about credit early enough for that kind of teasing.

When the girls miss their tour bus, Grace articulately heaves her feelings of failure at the girls: she didn't just want to see the Seine, she wanted to be the kind of girl who could make it to Paris and also be changed by it. That goal, as un-self-realized as it seems, is fabulously sharp and will likely have more of an impact on the tweens that watch it than any of the cultureless vistas of Paris and the Riviera doled out by director Thomas Bezucha. For as much traveling as the girls do by mopeds, limousines and yachts, the cities in which they live out their dreams and revel in "culture" look indistinct. I can tell you more about the clothing those girls borrowed than I can about the locations that supposedly give rise to their personal growth. The number of opportunities missed here is excruciating. At one point, after Meg confesses her inability to fully mourn the death of her mother, her Australian love-interest urges her to scream. A trite situation, for sure, yet one that begs for doleful, primitive, comically-raw expression. But this film lacks that vocabulary, and not just because it's a Queen-for-a-day fairytale, or even because it's about girls too reserved to express themselves, but because there's no room for sincerity in a film so hellbent on playing pretty pretty princesses without caring about the brains underneath the crowns.