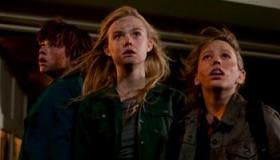 Judging by the hype, you might think that Super 8 was an actual companion piece to Amblin movies (E.T., The Goonies, Close Encounters) rather than a result of their inspiration. But that sense of nostalgia proves claustrophobic in J.J. Abrams' latest film, an adventure about a group of kids who unwittingly document an extraterrestrial disaster the government is covering up. Thanks to its secretive marketing campaign, anticipation is so high that Super 8 seems destined to score a home run at the box office, but its evocation of ‘80s-era Spielberg may not rally home viewing sales among the post-VHS generation.

Newcomer Joel Courtney plays Joe Lamb, a kid in a small Ohio steel town trying to come to terms with the death of his mother. His father Jack (Kyle Chandler), a Deputy Sheriff, would rather serve the community than spend time with his son, so Joe commits himself to his friend Charles' (Riley Griffiths) student film and enlists 16-year-old Alice (Elle Fanning)—an older woman—to play its leading lady. But after a secret shoot with Charles' Super 8 camera accidentally captures a spectacular train crash, they find themselves in the middle of a major conspiracy as Jack tries to solve the mystery of the train's killer cargo faster than the government can conceal it.

Amblin is probably second only to Disney in creating stories about dysfunctional families that find happiness after surviving some fantasy scenario, and the appearance of their moniker over the opening credits only cements the fact Super 8 is trying to draw from the same creative well. But writer/director J.J. Abrams tackles Super 8 like it's a time capsule, emphasizing cartoony period details while ignoring the cohesiveness of the stories that came before his.

The bigger problem is that Abrams never manages to merge the story of Joe and his dad with the science fiction stuff. It's in the moments Abrams attempts to combine emotional payoffs with popcorn-style thrills that the film rings most false, like when he means for us to sympathize with a creature clearly capable of large-scale destruction, or in the finale, two characters are cathartically reunited (and their emotional conflicts resolved) in literally the same moment.

But it's certainly not all bad: Abrams' handling of the burgeoning romance between Joe and Alice is so tender and beautiful that the only disappointment is that there isn't more of it, and the film the kids make ends up being at least as imaginative, entertaining and emotional as the one that they're in.

With two terrific directorial efforts under his belt (Mission: Impossible III and Star Trek), Abrams is obviously capable of finding the humanity in high-concept entertainment, but his aptitude for making characters compelling outweighs his ability to do so in the context of a cohesive story. (Two years later, Star Trek's plot holes are still being discovered even by its most ardent admirers.) And ultimately, nostalgia isn't enough to sustain this one, because its focus on kids actually betrays the fact that the folks most interested in it will be adults. Super 8 is at best a trip down memory lane, but it's also a reminder that we reminisce about the movies that inspired it not just because they came at a crucial time in our childhoods, because they were genuinely great. Unfortunately, this one isn't.