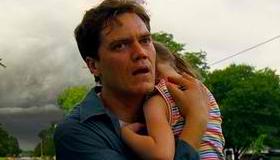 In Take Shelter, a construction worker questions his own sanity as he sees signs of an environmental apocalypse. This psychological thriller reunites writer/director Jeff Nichols and star Michael Shannon, whose work together on the southern gothic Shotgun Stories was career making. The drama of Take Shelter resembles Todd Haynes' Safe in its real-world fear and paranoia, but it's warmer, more poignant and more suspenseful than that 1995 psychodrama. Picked up by Sony Pictures Classics at Sundance after its debut in the U.S. Dramatic Competition, the studio is betting that Shannon's presence and the currency of the movie's themes will appeal to the indie crowd.

Take Shelter begins with an ominous image: a storm breaks. Curtis LaForche (Shannon) looks down at his hand and the rain falling on him is a sickly yellow. A delusion or reality? LaForche is having trouble telling the difference as his nightmares have begun to intrude on his waking hours. He observes disturbing cloud formations, weird bird behavior and other phenomena that suggest something terrible is on the horizon. He would share his fears with his wife Samantha (Jessica Chastain), but her plate is full pleading with their health care provider to cover their deaf daughter's treatment. Though not convinced that his perception is real, Curtis' mistrust of his sanity isn't enough to keep him from a spending spree of canned goods, gas masks and a shipping container to convert into a shelter.

Take Shelter's only flaw is it's too long. Nichols does a fabulous job setting up LaForche's situation, the small-town Ohio milieu in which he lives, the emotional and financial pressures that he and Samantha face dealing with their little girl's condition and his devotion to his family. Nichols also keeps the audience as off balance as LaForche is with imagery that's as spooky as it is realistic. The ambiguity of the environmental menace (from oil spills to the disappearance of bees) matches LaForche's uncertain mental competence, and is one of the film's greatest strengths. Is LaForche insane or the sanest man in the room? There is a point Nichols could end the movie and retain that uncertainty. Instead, he opts for something more explicit and that robs the film of a bit of its power.

Take Shelter is the latest example of Shannon's prowess as an actor; he's surrounded by a great supporting cast that includes Chastain, Kathy Baker as his mother, Ray McKinnon as his older brother and Shea Whigham as a co-worker and friend—but this is Shannon's show all the way. LaForche's distress and confusion are palpable and whether his perceptions are correct or not, the costs are going to be high. Shannon makes the man's dilemma plain and moving, and that gives Take Shelter a resonance that last long after the final fade out.