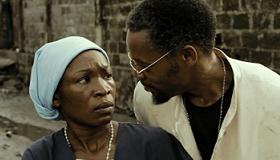 Viva Riva! is a film festival favorite and African Academy Award winner from Congolese director Djo Tunda Wa Munga. Riva (Patsha Bay), the main character, is a low-level gangster and Congolese expatriate who'd like to move up in the world, so he steals a shipment of gasoline from his Angolan bosses and heads back to his home town of Kinshasa where he'll sell it for a fortune and party like he's never partied before. As gangster films go, this one is serviceable. It takes from American gangster classics (White Heat and both Scarface films come to mind) but its unique setting and underlying themes give it distinction. Still, it's fundamentally built from the stuff of gangster films (stealing, cheating, betraying and killing) and there's always an audience for that stuff, even if it's in a language we don't speak (French) and another language we've never heard spoken (Lingala). This one will do respectable business, especially with African expats from places like Rwanda, Burundi, Zimbabwe, Namibia, Chad and the Sudan, who understand both the languages and the history that drive the action, some of which is unique to the people of Angola and the Democratic Republic of the Congo (DRC).

Though gasoline is ostensibly the catalyst in Viva Riva!, the drama's actual driving force is a woman. At the top of Riva's list of things to do is capture the heart (or at least the body) of Nora (Manie Malone), femme-fatale and girlfriend of local gangster, Azor (Diplome Amekindra). To get the girl he'll need money, and to get the money he must sell that gas at the height of the market. Apparently gasoline is more valuable than gold in the DRC: you can buy a Mercedes with gold, but it won't run on it. The Angolan mobster Riva robbed wants his gasoline back. He and a few thugs arrive in Kinshasa to take back the petroleum and teach Riva a lesson. They do this reluctantly because Angolans and Congolese peoples don't get along. The long standing issues between these peoples of colonized, deprived and war torn countries are a significant part of what's going on in Viva Riva! Race and ethnic hatred is not new in gangster movies; gangsters are universally racist in what ever configuration is required to justify their gangsterism, nevertheless, to watch black Africans demean and abuse one another purely based on the distinction of race gives one pause.

Riva is reckless in his pursuit of Nora and his dealings with the gasoline. (His behavior often crosses the line from brash and obnoxious to outright stupid.) It's not long before several people want him dead. Frankly, it's vexing why Riva is so reckless. As the story progresses, notions about where this attitude comes from (a difficult childhood that lead to his running away a decade earlier) are revealed. Still, one is hard pressed to like this character, though the actor who portrays him gives a solid performance, as do all the players in this generally taut and fulfilling thriller.

This is a violent movie, raw and brutal, frankly not unlike the nation in which it is set, where strife and civil conflict are currently a fact of everyday life. As has been often noted, truth is usually stranger than fiction, so one supposes the darkness represented in this film does not compare to the real evil we know such conflicts propagate. This is just a gangster movie, but it has the edge of a unique time and place, and in a crowded summer movie market any edge will do.