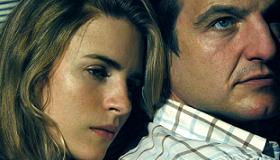 Mike Cahill's Another Earth is such a superb and original narrative film debut that people who write about movies think they're doing it a favor by comparing it to other movies and directors they love. Here's a comment I posted to Facebook shortly after seeing Cahill's movie at Sundance 2011: "Sundance title to watch for: Another Earth (stunning debut film from Mike Cahill—Kieślowski meets Tarkovsky meets Philip K. Dick)." See how complimentary that is? And do you also see how it's really, really insulting? Another minor affront, in this case one I'm required to deliver by way of the review format mandate, is a bit of market analysis: there's an audience for this movie. It'll be driven to see it by the reviews, most of which will be ecstatic, none of which you should read. For your sake, because you deserve good movies, you should hope distributor Fox Searchlight will invest a few bucks to remix Cahill's soundtrack, and maybe do some dialogue replacement, because as lushly visual as Another Earth is, it's a no budget indie, and it needs to be polished up a bit so it can truly gleam. Word of mouth will yield returns.

But getting back to my Facebook post: That kind of praise by comparison solves several problems for the professional film commentary writer in the age of the blog and tweet. It establishes expertise—one of the few things the paid critic has to offer now that everybody can get their opinion out there. It also alleviates some of the analyst's responsibility to, well, analyze—easy enough if it's a Harry Potter movie or another Pixar "fable for grown-ups," but pretty tough when you come across something truly unique.

I'm vamping here, because in thinking about Another EarthI've come to realize that almost anything I tell you is going to spoil something about this poetic jewel. I can give you the brilliant sci-fi premise, but that'll focus your attention on something that is really more mystery and metaphor than high concept, and bring you to the movie with misplaced expectations it wasn't designed to meet. I can describe the device Cahill and his star/co-writer Brit Marling use to bring two lonely people together in a shared state of mourning and mutual discovery, and in that way I can rob a significant component in a delicate story of its visceral power. To synopsize this film would be to kill it a little—to drain it of blood. You don't want me to do that, and I don't want to do that either.

So let me try to give you some plot details expressed in a way that won't keep you from having your own experience with Another Earth. Here goes:

There are two characters who dominate this movie—a middle aged man (William Mapother) living in the aftermath of what he thinks of as his life, and a young woman (Marling) trying to find some uniquely personal way to atone for a mistake. They are beautifully realized creations—the girl especially. Something miraculous arrives in the sky. As it grows closer to Earth, the man and the woman are taking the first tentative steps toward separate kinds of healing.

Other factoids you may find intriguing: Marling has never acted before, but she's terrific. Cahill is a documentarian, which explains the excellent camerawork but not how he managed so many unassuming but perfectly realized effects shots on a relative shoestring. At Sundance, the festival organizers didn't really realize this was one of their best movies in a good slate until audience reaction told them so.

And, oh yeah. It made me cry. More than once.

A love story for the imaginative, an art film for the masses and an absolutely achieved debut at a level of execution that inspires comparison to some of the greatest of arthouse greats, Another Earthis, ultimately, something singular. I can't describe it to you, because you're going to be a full partner in your experience of this movie, and it will be entirely between you and Another Earth, and have nothing to do with me.

What I can say is if you're flesh and blood, and have ever suffered a substantial loss, you will be moved by Another Earth. And also renewed.