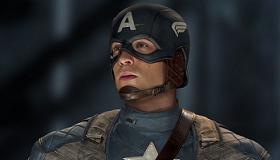 To call Captain America: The First Avenger the best superhero movie of the year is absolutely true, but that's less of a compliment than it sounds. After a series of lackluster adventures, Joe Johnston shrink-wraps Americana in the super-powered physique of star Chris Evans and serviceably approximates a brisk, Raiders of the Lost Ark-esque sense of adventure, albeit without the singular Spielberg spark. Although second-week receipts for Harry Potter will put the squeeze on its box office share, expect strong returns for the Marvel franchise's final superhero introduction before its crossover opus The Avengers opens in 2012.

Evans (The Losers) plays Steve Rogers, a WWII-era featherweight from Brooklyn who enlists for a top-secret government experiment after the military deems him unsuitable for regular service. Transformed into a muscular super-soldier by Dr. Abraham Erskine (Stanley Tucci), Rogers is eager to fight at the front, but the government decides he's of better use selling war bonds to civilians in corny musical revues. But after Rogers crosses enemy lines to single-handedly rescue his longtime pal "Bucky" Barnes (Sebastian Stan) and his captured platoon, Colonel Phillips (Tommy Lee Jones) signs him up as a proper soldier and strategist against HYDRA, a Nazi splinter group run by the megalomaniacal Red Skull (Hugo Weaving).

Johnston's last two films, Hidalgo and The Wolfman, were dull flops and fans have been skeptical if the director could successfully bring life to Marvel's arguably last iconic superhero. But Captain America finds Johnston soaring back to Rocketeer heights, nimbly conjuring halcyon Americana without pushing its patriotism into cornpone camp. He creates in Cap a genuine everyman, an underdog who has to prove himself even after he develops powers that put him head and shoulders above his fellow soldiers, and the film shares that scrappy attitude, a hard-won sense of respect that never feels content to rest on the merits of its blockbuster machinery.

At the same time, this character is sort of Marvel's version of Superman, a blandly earnest, uncomplicated and most of all indefatigable hero. Unlike the introspective antiheroes of other recent franchises, his biggest emotional obstacle is people not letting him contribute rather than an internal debate whether he even wants to bother. Johnston smartly encourages Evans to play those qualities straight, creating an authentic profile of a man who through his behavior becomes a hero instead of trying to humanize a hero who occasionally behaves like a man.

But what really distinguishes Captain from the other superhero movies of 2011 (and quite frankly, the majority of the others released in the last several years) is a romance that feels like an integral—not incidental—component of the plot. As British agent Peggy Carter, Hayley Atwell holds her own against the rest of the ensemble's wall-to-wall testosterone. The understated evolution of her attraction to Evans adds dimensionality to both of their characters and lends a poignancy to the story's inevitable conclusion. Yet because the filmmakers have to find a way to get Captain America into a contemporary context in time for The Avengers, a number of period-specific subplots are overshadowed by the mechanics of connecting the two franchises, and their blossoming love affair suffers the most.

That's the film's biggest problem: it barely gets a chance to create its own world before it must move on to the next one. The origin-story aspect of this film is better-executed than most, but a modern-day opening sequence and a final-act wrap-up telegraph this film's context in a larger cinematic blueprint. By the time we've gotten invested in seeing Cap crush Axis enemies, not to mention become empowered as the hero he's always wanted to be, it seems like the filmmakers have already turned their focus to how he will fit into a different franchise. And the decision to back this film up directly into The Avengers means that we'll never get to see another WWII-era Captain America story again, which is doubly disappointing since that context lends his adventures a significant part of their appeal.

As the shepherd of this story, while Johnston doesn't quite have the personality that distinguishes Spielberg's work, he's proficient in four-quadrant entertainment easily with the technical chops to render the adventure in operatic terms while protecting its believability. (That said, the Benjamin Button-style technology used to create the 80-pound weakling version of Steve Rogers too often makes Evans look like his head was painted on a balloon and stuck onto a stick-figure body.) But that Captain America is solidly engaging and effective is sadly more than can be said for many of the other movies in the Marvel universe. By default as must as by design, it's the best superhero story you'll see this year. Let's hope it doesn't just set up the story of The Avengers, but sets a standard for its quality.