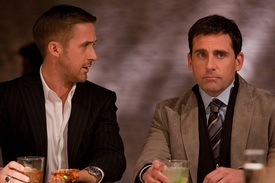 Smart, sophisticated adult comedies are increasingly rare—and smart, sophisticated adult comedies from a major studio are an absolute endangered species. But Warner Bros. has brought the species back from the brink of extinction with this crazy funny delight in which Steve Carell, a faithful but boring dad and husband, is thrust into the perilous life of a swinging single guy when wife Julianne Moore boots him out. Released into this season's wilderness of raunchy comedies and 3D comic book fare, the only thing 3D about this sexy, hilarious romp is a script full of three-dimensional human beings. Strong word of mouth among adults will ring up some solid summer coin.

With a surprisingly mature screenplay by animation writer Dan Fogelman (Tangled, Cars) and top flight direction from Glenn Ficarra and John Requa Crazy, Stupid, Love cuts to the heart of the matters of the heart. Carell and Moore are good people in a seemingly ideal union of 30 years that's crumbling from within. Then it's detonated entirely when when the frustrated Moore files for divorce. Together since high school, the twosome have never dated anyone else. Being unused goods on the meat market creates massive complications for them both, especially for Carell when he's approached at a bar by swinging single savant Ryan Gosling who decides to show him how the modern dating world is sliced and diced. Fogelman's smart script uses this premise as a set up for hilarity, but never loses sight of reality. These over-the-top shenanigans could be simply a vehicle for Carell to strut his stuff, but this actor and these filmmakers are much too wise to let the movie backslide into Hollywood cliché.

A superb ensemble cast makes the most of the comedy's numerous detours and storylines. Carell's makeover allows for some funny bits with a hot-to-trot teacher (Marisa Tomei, terrific) as well as his own babysitter (Analeigh Tipton) who suddenly seems to fall for him. Yet under the surface, tutor Gosling seems to be quietly longing for the kind of life Carell once had. This becomes clear in his own new relationship with the bubbly hard-to-get Emma Stone who presents something he never thought possible: a chance for commitment. Meanwhile a second chance at love for the radiant Moore turns up in the form of work colleague Kevin Bacon, which comes with its own complications. All this leads to a twisty rollercoaster climax which somehow works brilliantly in the context of what has come before.

Carell has never been better—here, he proves he is perhaps the top film comedian of the moment. Moore brings her usual warmth and believability. But youngsters Gosling and Stone threaten to steal the show from underneath these vets with Gosling's hilarious ultimately sympathetic Lothario and Stone's wonderfully real and beguiling screen presence. For discerning adult audiences looking for a flick that with a sophisticated spark, title aside, Crazy Stupid Love is anything but dumb.