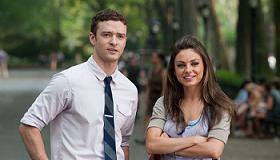 Let's be frank: if genetic gods like Mila Kunis and Justin Timberlake can't find humans to bone, what hope is there for the rest of us? But bone they can't—at least not anyone up to their standards of high libido and low emotional attachment—and so like reading a fable from Mount Olympus, we're invited to spy on these immortals as they meet cute, mate and then make sense of the whole thing. This is the film meant to solidify Kunis and Timberlake as movie stars. That's more likely than the film making bank. Still, Screen Gems should sell enough tickets to buy those crazy kids some gold-plated toasters should they ever decide to make it legal.

Friends With Benefits is a thoroughly modern movie. Not in its approach to sexuality—as Kunis' mom Patricia Clarkson says, casual porking has been hip since the '70s. (And if you doubt her, behind her head the TV plays Bob & Carol & Ted & Alice.) Rather, Benefits is trés 2011 in its cool-for-school shorthand of hit blogs, viral videos, touch screens and flash mobs. Okay, those last two are more 2008. But its Hackers-esque need to be of the moment can't disguise the fact that director Will Gluck has made a '40s comedy in millennial skivvies. Kunis and Timberlake have the rare chemistry and rapid-fire patter of Katherine Hepburn and Spencer Tracy, if Hepburn and Tracy had conversations like the following about Olympic snowboarder Shaun White's pubic hair:

"Does the carpet match the drapes?"
"It's more like a hardwood floor."

There's a lot of talking in Friends With Benefits. The pair talk more than they do it—in fact, they talk while they do it—and that's not a bad thing. (The one love scene where they keep their mouths shut is almost uncomfortably intimate.) The four-person writing team's script is flip and corny and desperate for laughs, but where it works is by giving us the impression that the two are as desperate to get inside each other's brains as in their pants. Call me a sucker, but after a decade of The Bachelor, these days that's what passes for romance.

Pity poor Woody Harrelson that the script didn't give his character a chance to clam up. In a move that must have seemed like a bold stance against gay panic on paper, he plays a gay sportswriter who in six scenes has only one conversation topic: that he likes to "troll for cock." Richard Jenkins surfaces as Timberlake's Alzheimer-stricken father, again investing more acting talent than the role requires. He's so sincere that his scenes make us forget this is supposed to be a comedy. Emma Stone and Andy Samberg pop up in strong, slight scenes as Timberlake and Kunis' exes, and Clarkson is fearless as the selfish love junkie who supposedly wrecked her daughter's emotional health—though despite the flick's insistence that Kunis is damaged goods, all I see is a smoking babe who likes to drink beer, crack jokes, bone and play the tuba.

Is Friends With Benefits better than No Strings Attached? A hair. It's equally bantamweight, but the spark between the leads sells it. Where No Strings Attached was Natalie Portman proving she could party and Ashton Kutcher proving he still exists, their romance never elevated beyond dumb puppy love and they let supporting players like Greta Gerwig and Lake Bell swipe the movie away from them. By contrast, Kunis and Timberlake are out to prove they deserve adult careers, and tabloid buzz aside, their scenes are combustible even with their clothes on. Tellingly, it's when they're wrest apart by their egos in the film's third act that the energy flatlines.

A running joke in the flick is a horrendous rom-com-within-a-rom-com starring Jason Segel and Rashida Jones. Early in their hangouts, Kunis and Timberlake snicker at its phony emotions: the last minute reprieve, the speech about each other's beloved quirks and the happily-ever-kiss. Not that Friends With Benefits isn't predestined to end the exact same way. By poking fun at the cliches, director Gluck thinks he can turn an inevitability into an in-joke. Eh, it'll do. But all this sweet stuff is totally c-blocking what makes Benefits work—and hey, dirty minds, the "c" stands for conversation.