close
This flick is getting pink-slipped 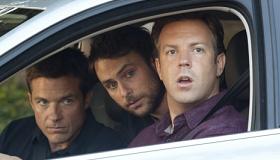 When Spoon's "The Underdog" spins on the soundtrack ("You got no fear of the underdog—that's why you will not survive"), Horrible Bosses gives the impression that it's about men fighting to climb the workforce ladder. Not exactly. These three professional subordinates, Jason Sudeikis, Jason Bateman and Charlie Day, lack the instincts to play at the big kids' table and most of the comedy's running time is dedicated to their mealy, sniveling, occasionally endearing high jinks. In the spare minutes, these beta males blunder their revenge against the alpha bosses they blame for their stalled careers. Do the boys get in trouble? A bit. But the laughs are proportionate to the stakes, which are middle-of-the-road. On the upside, the cast is stellar, the boys and their bosses Kevin Spacey, Jennifer Aniston and Colin Farrell constantly one-upping each other with improv. (Farrell's charismatic, coke-snorting troll with a comb-over wins.) Director Seth Gordon gives us few thrills, little danger and no growth-potential. Still, with the recession making lots of workers murderous, expect to see decent numbers of angry employees buying tickets for the wish fulfillment of giving their bosses the heave-ho.

Nick (Jason Bateman) is in sales and certain his manipulative boss Dave (Kevin Spacey) is going to promote him. Why? He's getting crueler and that proves, "he knows it's the last time he'll be able to treat me like this." Dale (Charlie Day) is a dental hygienist and registered sex offender (not his fault, he swears). But his record makes him a difficult hire, meaning boss Julia (Jennifer Aniston) has him under her manicured thumb—but she really wants him in her bed. Only Kurt (Jason Sudeikis) loves his boss, but when patrician old man (Donald Sutherland) dies, control of the chemical company is seized by his massage parlor enthusiast son Bobby (Farrell, nearly unrecognizable), a cretin who just wants to fund his drug habit. And then things get worse. Pushed to their limits, the boys plot to kill their evil overlords. But how nasty can things get in a film where the getaway car is a Prius?

Okay, that's glib, but rightly so. These guys approach their hits like weekend warriors, first doing fumbling recon and then storming the Orchard Supply Hardware for their weekend to make Bernies. They're so sheltered, they consider themselves geniuses for asking the Prius' call-in navigator directions to "the most dangerous bar in town." Horrible Bosses celebrates them for breaking out of their safe-zone while the film itself is stuck in middle gear. Why Sunday-drive a comedy where the audience wants toxic, wickedly funny catharsis? Sudeikis, Bateman and Day all play the straight man—it's their bosses who stand out—but while they're impeccably good at being the butt of the joke, their moral circuit is too tidy. Says Bateman's Nick: "Success is taking shit." By that measure, he's clearly the most successful guy in the movie. (When these boys were 8, didn't they hear Optimus Prime say they must "be true" to themselves?) But the film's carved its own tombstone with Nick's maxim. With taking shit at its center, only one of two things can happen: it can go whole hog at middle class malaise, or it can dabble in debauchery like Dale, Nick and Kurt. Sure these pals are great and their bosses are fiends, but they can't get revenge because the movie frames it as flawed—and the audience can't take the chance of murder seriously when even the movie doesn't. No one in this game is standing tall, but the good guys' natural condition is on all fours.

The actors acquit themselves most impressively during the blooper reel where you can see Jason Bateman laugh hysterically (great!), Charlie Day look deliberate (confusing!) and Jason Sudeikis wield the charm that will make him a leading man. They're hired—but I'm firing the script.