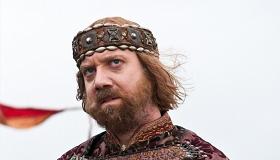 The days when studios aspired to tackle big historical events in grand style are long gone, and now the task falls on ambitious independents and with decidedly mixed results. Tragically, some of the less impressive recent entries (Neil Marshall's Centurion and Kevin McDonald's The Eagle, both based on the same slice of 2nd Century Roman lore) have come from the same British film industry that was once such a reliable supplier of them as far back as the times of Alexander Korda, who practically invented the genre. Thanks to sophomore director Jonathan English's smart and exceedingly adept Ironclad, however, both the genre and British period cinema appear safe—at least for the time being. Brawny enough for the young male set yet brainy enough for the intermittent history buff, Ironclad should reap solid crossover numbers for upstart distributor Arc Entertainment, enabling both the distributor and production company—Mythic International Entertainment—to gain a stronger industry foothold going forward.

The setting in this case is the post-Third Crusade and post-Magna Carta early 13th century, a period best known to film buffs through the oft-filmed exploits of Robin Hood (and, to a lesser degree, "Ivanhoe"). Fans of those films will no doubt recognize the villainous character of King John (Paul Giamatti) once again up to his old tricks, though this time it's not a band of merry men tormenting him from his rear but a ragtag collection of freedom fighters preparing to confront him head-on. Led by the baron Albany (Brian Cox), a brooding knight Templar (James Purefoy) and assorted men of passion and courage (Mackenzie Crook, Jason Flemying, Jamie Foreman), the fierce but hopelessly outnumbered force determines to hole up in a southern English castle where they aim to intercept King John and his army of Danish mercenaries on their return from France, hopefully forestalling the vengeful monarch's goal of avenging himself on the instigators of the Magna Carta and reestablishing his unrighteous dominion in England.

To seasoned movie buffs, this is hardly virgin territory: The Seven Samurai, The Alamo, Braveheart and their countless sequels, imitators, remakes and knockoffs have worn this saga well for more than a half century, in large part because it's a scenario which has repeated itself in reality at least as often as in fiction, and rarely with the same outcome. What sets Ironclad apart is both the factual basis of the story—which writer/director English (who scripted with Erick Kastel, based on a previous screenplay by Stephen McDool) has rigorously honored—and the incredibly high stakes, for had King John succeeded in reasserting his rule at the expense of the nascent Magna Carta, the rule of law and civil society as presently constituted throughout the Western world, if not the world itself, may never have taken root. Not that English's characters necessarily understand that their swords, arrows and parapets represent the land stand for freedom and modernity—it's enough that the audience knows. That they are fighting for their own freedom and for the futures of their families is enough for them to fight with the kind of ferocity that comparable PG-13-rated studio efforts (like Ridley Scott's bloated and misbegotten Robin Hood) seem too fearful to embrace. English, however, pulls no punches in staging some of the most brutal action in any recent period film, faithfully true to the spirit of the era without wallowing in video game-style gratuitousness.

Casting is almost uniformly first rate with Cox, Purefoy and the always brilliant Giamatti providing noteworthy standouts. Brief appearances by Charles Dance and Derek Jacobi further bolster the pedigree along with a broad assortment of excellent but lesser known supporting players. Technical contributions are superior across the board.