Leave It On The Floor 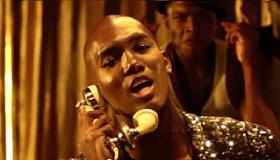 If you saw Nine (which should have starred Joel Grey and been called Nein!) you might think the movie musical is dead. Elephantine and idiotic (an autobiographical movie masterpiece by Fellini comes back as a movie musical by Rob Marshall?), Nine convincingly proved that Hollywood has lost its touch when it comes to one of its signature genres. But that's the big, industrial Hollywood—the one that puts all its production capital into kid's cartoons and adolescent empowerment fantasies. Leave It On The Floor, director Sheldon Larry's slamming, profane, micro-budget melodrama, inhabits all the backstage clichés we thought were dead, and by a trick of perspective makes them riveting and new. An urban audience is insured and a bigger audience would enjoy themselves if theaters give them a chance to see this marvelous film.

The trick of perspective is in the milieu, and there's where the third rail lies in these divisive times. Despite an African-American president in the White House, at least two groups can still be unfairly, openly and even profitably reviled in the U.S. simply for being who they are: Muslims, thanks to those who choose to use 9/11 as a broad-brush rather than see it as an act of extremism, and gay women and men, thanks to the unholy alliance between the sexual hysteria the US has always been prone to and a very selective reading of the Bible. Leave It On The Floor, which vitalizes the world of African-American drag queens in the most accessible sense possible—through song and dance—deserves to break out. In a better world, it shouldn't have to.

After all, and despite what you've heard, there is no such thing as an American Christian fundamentalist, if by that term what's meant is someone who lives their life entirely in accordance with the Old and New Testaments. For example, how many people you know believe that a child who curses his mother or father should be put to death? In America, cursing one's parents is an adolescent right of passage at least as old as Rebel Without A Cause. But Leviticus 20:09 sayeth: "For every one that curseth his father or his mother shall be surely put to death: he hath cursed his father or his mother; his blood shall be upon him."

Le 20:10 offers up a law at least as honored only in the breach: "A man who commits adultery with another man's wife is one who commits adultery with the wife of his fellowman. He should be put to death without fail, the adulterer and the adulteress as well." Since surveys indicate a bare majority of married American men and a significant minority of married American women commit acts which would be considered adultery by the Good Book, there's a whole lot of killing that needs to be done.

I mention Leviticus even though the Mosaic laws as set forth in Exodus and Deuteronomy contain a whole bunch of mad and murderous precepts, along with the Ten Commandments, which are easily among the most humane and influential codes of behavior to arise from the ancient world. Because Leviticus 20:13 also says this:

"If a man also lie with mankind, as he lieth with a woman, both of them have committed an abomination: they shall surely be put to death; their blood shall be upon them."

And wouldn't you know it? That one gets cited all the time as evidence of how "God hates fags" if I may quote the good people of the Westboro Baptist Church, which by the way has only 71 members although it's racked up a million undeserved headlines. Presumably Le 20:13 has been brandished by more than a few adulterers and cursers of their fathers and mothers, who maybe ought to be staying true to their own code of ethics by exterminating each other first.

That's a very long-winded digression for a movie review, but then after years of doing this stuff, I've gotten very tired of listening to the public discourse, and then going to movies created by gay filmmakers that are full of warmth, love, compassion and light. Leave It On The Floor is another such movie—one of the best I've seen, right up there with Hedwig And The Angry Inch. In the past, it's the sort of picture that would have restored my faith in the cinematic arts—it is that unexpected, and that good. This time, it's just made me angry—at us, not the filmmakers.

This is a movie as American as On The Town or Purple Rain, about characters who yearn for a moment of transformation and transcendence, just like everyone else who buys into the American dream. It's an environmental musical made on a shoestring, where the low-budget trappings benefit things by providing a kind of nervous energy Ryan Reynolds and green screen effects are incapable of capturing. The score is straight-up terrific, and the ambition of the whole undertaking, which was largely crewed by Sheldon Larry's students from the USC film school, takes the breath away.

LIOTF is a backstage musical with fire in its belly and a setting most people know nothing about: the drag ball scene, where gay men compete against each other by assuming a kaleidoscopic array of identities, from button down businessman to matronly Missionary Baptist dowager. It's gritty and fantastical all at once, and it loves its characters and the city of LA (where LIOTF was filmed), like nobody's business.

It also loves its enemies, which is another Bible precept more than a few choose to overlook. Perhaps the most moving number occurs at a funeral, where the lead ensemble, comprised of a dysfunctional but loving household of gay African-American men, is confronted by a chorus of their disaffected parents. You'd expect this to be a "fish in a barrel" moment, with director Larry and screenwriter/lyricist Glenn Gaylord knocking down homophobic straw men. Instead, a rousing gospel number (the film's excellent and varied music is by veteran music director Kimberly Burse) allows each point of view (and each point of view within each point of view) to be heard, and there is no resolution, except the one life offers up in the context of irreconcilable difference: the pain of lost love and parted ways.

I defy anyone with ears to resist Miss Barbie-Q's beautiful rendition of "I'm Willing," a paean to a love so strong that a knowing acceptance of humiliation becomes a kind of dignity, all sung in nondescript street clothes on the bus to the penitentiary where a rage-aholic boyfriend waits. Or the delightful and show-stopping "Justin's Gonna Call," sung by lean, cool breakout performer Phillip Evelyn, where the old showbiz dream is dusted off and renewed by a down-and-out character's certainty that Justin Timberlake is going to make him a star.

The keynote address comes in a bowling alley, where new recruit "Bad Brad" (charismatic dancer Ephraim Sykes) complains about the chintzy life the marginalized drag queens lead. The film erupts with a stunning dance number, explaining to Brad how much beauty and excitement there is in life if you just adjust your view.

That's a message a lot of people can use, and it's to be hoped LIOTF breaks that message out of the gay arthouse circuit and into the general audience that would surely embrace this film—if they can be persuaded to see it. But it does still give me pause. Black people were pushed to the margins in America for centuries, and they responded by decorating the cell they'd been confined to with jazz, funk and rock ‘n' roll, enriching us all. The gay demimonde's impact on movies, the stage and American dance music is gigantic—ask Madonna, whose smash hit "Vogue" moved a gay music and dance craze straight into the mainstream. If the common humanity that unites us all wasn't more powerful than the fear factory, Americans would still be doing the polka to Lawrence Welk.

But forgive me for saying: I would settle for a less wonderful movie in a more just world.

For now though, Leave It On The Floor will have to suffice, and you should see it, if you're of voting age and have a toe to tap and an ass to wiggle.