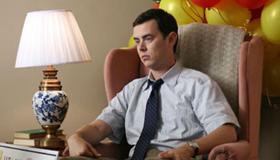 Ben (Colin Hanks) is affable, if not particularly forceful or bright. He's also a serial killer with a penchant for pretty young girls. As it happens, he kills a young lady not long after she's bought a winning lottery ticket. Before long, he and his mother (Ann-Margret, executing her role with great aplomb) are worth $36 million. It looks like a lucky shove, but money won't cure Ben's bloodlust, which means it can only attract eyes and complications. Enter Lucy (Ari Graynor), a forceful childhood friend who pretty much ignores Ben when she's not belittling him. When he wins $36 million she notices, and the dark part of this comedy starts slowly rolling. Lucky has its moments, but even with good, sometimes exceptional performances, its criminally vile characters are never likable enough to make you laugh at (or forgive) their wickedness. Lucky might garner a cult following once it hits video, but theatrical box office will be slight.

Lucy (Graynor) is actually the central character in Lucky. A receptionist at the company where both she and Ben work, Lucy's marked by a speechless parrot sidekick and an affair she's having with a junior executive. When the junior exec dumps her and Ben wins the Lottery, she sets her sights on him. It's a purely mercenary act, and thus undermines whatever affection we might have begun to nurture for her—which can't be much because she's unnecessarily odd and her cruelty to Ben seems purposeless and only worsens as the film goes on. Miss Graynor plays every scene with whatever vice is called for, from charming and coy to dead sexy and deceptive—and does what it takes to get Lucy what Lucy wants. If only we liked her. Even Ben, whose habits are so generically evil, isn't equivalently likable enough to counteract his villainy; though more likable than Lucy, Ben's primary trait is he's irritating. Colin Hanks has his dad's (actor/director Tom Hanks) DNA, which might be fortunate, but he's going to need to build a few quirks of his own.

The film's title is ultimately ironic; no one in the film is particularly lucky at all. The girl who buys the ticket ends up dead, Ben's simple life of killing pretty girls is disrupted by the $36 million, and Lucy marries Ben only to find out he's serial killer. Adding insult to injury, she learns he's inadequate at that and can't even respect his extra-curricular skill set. A whole mess of funny that doesn't inspire any "ha-ha," Lucky may be dark, but the comedy element is still under investigation.