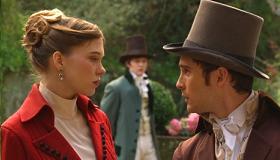 Chilean-born auteur Raúl Ruiz doesn't believe in brevity. His previous Proust adaptation Time Regained was an epic 162 minutes. Now he goes for broke with Mysteries of Lisbon, a literary adaptation that clocks in at four and half hours. Based on a classic Portuguese novel so rare it has yet to be translated into English, there's a sense this film's implied comprehensiveness offers more fidelity to its exceptional source material than a more conventionally sized picture could. A feast for the eyes, Mysteries of Lisbon deals with 19th century passions, love affairs and escapades on a broad canvas. It might have made a lovely TV series, parsed out over several weeks, but at one sitting it's a challenge. Ruiz fans will attend and given the dearth of Portuguese-language films, one could make a real case for marketing this to Portuguese speaking communities. Short or long, this prestige pic is by a master and in a language we rarely hear in pictures. Distributor Music Box Films is nothing if not sharp about its acquisitions.

Raúl Ruiz's ambitious globetrotting tale aims to roll elements of Dumas, Dickens and Hugo into its tales within tales, as they span countries and continents from Portugal to Paris, then Italy and Brazil. Based on a novel by Camilo Castelo Branco (no relation to the producer) Mysteries follows the destiny of Pedro da Silva (played as a child by João Arrais and as an adult by José Alfonso Pimentel), an orphan in a Catholic boarding school who ventures out to find his true identity.

Along the way he becomes embroiled with jealous countesses, reformed libertines and mysterious priests (but not necessarily in that order). It is rather like watching the details of a tapestry come slowly to life.
Indeed Ruiz's elegant camerawork and sharp eye for imagery prove seductive, despite the film's epic running time. This is a gargantuan feast for the senses although often it is too overwhelming for comfort.

As the boy's personal history begins to unfold, the intrigue of it all begins to exert a powerful grip. Allied with the fascinating character Father Dinis (Adriano Luz), we learn the priest has a direct connection to the boy's past and previous life.
Against the odds Mysteries received the prestigious Louis Delluc prize from the French last year—a controversial choice given that the film is mainly in Portuguese.

Still you have to admire Ruiz's audacity in attempting such an expansive production in these strained times, and his sheer love of storytelling comes shining through—even if the film's duration has the ability to push your patience to its limit.