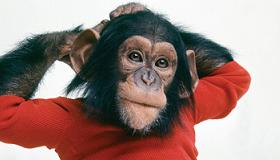 The incredibly true journey of a chimpanzee named Nim begins in 1973 at the Institute for Primate Studies in Norman, Oklahoma and continues to Columbia University laboratories to end somewhat sadly at an animal sanctuary in Texas. British filmmaker James Marsh recreates this tale of an ambitious primate language study through traditional face-the-camera interviews, clever graphics and dramatic recreations. A powerful musical score adds gravitas. Objectively, this is the story of a linguistic experiment, but intimately, this is the story of Nim Chimpsky (a pun on Noam Chomsky, the linguist who believed grammar was exclusive to humans). Nim was treated as a human in order to learn sign language, an experiment with many consequences. Expect Roadside Attractions, who bought U.S. theatrical rights at Sundance, to match the domestic earnings of Marsh's last doc, the Oscar winning Man On Wire.

Marsh is comprehensive in gathering interviews from many of the people who worked with Nim. He also completes what Terrace and his colleagues at Columbia intended to do through sign language: make Nim a dynamic human-like character that tugs at your heartstrings, wins you over with language and then frightens you with violence. The film's climactic scene, when LaFarge reunites with Nim after many years inside his cage at a Texas animal sanctuary, is as frightening as can be found in any horror movie.

Behind the well-placed jolts, cameraman Michael Simmonds' tense dramatic recreations and Dickon Hinchliffe's atmospheric music, Marsh continues to emphasize the core questions about the project: How successful was Terrace at redrawing the line between humans and animals? Was it right for LaFarge to treat Nim like a baby instead of a pet?

Marsh blurs the boundaries between non-fiction and fictional film with Project Nim, which premiered in the World Cinema Documentary Competition at the 2011 Sundance Film Festival. It's a filmmaking style Marsh began with his early documentary Wisconsin Death Trip and continued to perfect through Man On Wire, the story of French high-wire artist Philippe Petit and his 1974 walk between the Twin Towers of New York's World Trade Center.

Though impressive, Project Nim dazzles a little less than Man On Wire. Marsh's best film to date is actually not a documentary but a thriller: Red Riding: 1980, his feature-length installment of the Red Riding Trilogy, an incredible three-film drama about the Yorkshire Ripper.

Still, with an Academy Award under his belt, Marsh continues to build a following among U.S. specialty film fans. Positive reviews and coverage regarding the validity of such animal experiments will help reintroduce Nim Chimpsky's story to audiences who remember the original stories as well as those learning about Nim for the first time.