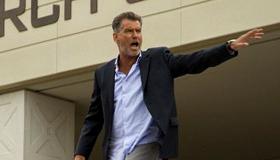 Shotgun meets fish and barrel in Salvation Boulevard, a mostly unfunny attempt at satire that takes aim at Christian Fundamentalism with the precision, finesse and insight of a dog urinating on a sidewalk to mark its territory. Unless some rightist think-tank types decide to denounce this star-driven but non-studio film to "prove" how Hollywood hates Jesus, Christian dogmatists probably won't notice it enough to be offended, while the secularists it aims to please just won't laugh. Send this one off to purgatory as a download and/or DVD, or better yet make like Pilate and wash your hands of it. In this case, boredom is the deadliest sin.

The set-up finds Pastor Dan Day (a game but miscast Pierce Brosnan) debating atheist (and Christopher Hitchens clone) Dr. Paul Blaylock (Ed Harris) on the topic of belief. The two men retire to Blaylock's office, taking Christian convert Carl Vanderveer (Greg Kinnear) along with them as a sort of debating trophy. Over drinks, Rev. Day brandishes one of Blaylock's antique pistols while making a point and the relic goes off. The atheist falls. The plot is off and running. Or off and stumbling, at least as a work of social satire.

A satire really only works when its creators fully understand their subject and can undermine it by showing its fallacies through details that feel inhabited and true. It's a tough feat—South Park does it every week, but most people aren't comic geniuses like Parker and Stone. The set-up in Salvation Boulevard is shallow and entirely situational; put any two polite antagonists in the same room with the same gun and you could have the same outcome. And it isn't satirical to have a Christian leader act like a villain in a bad film noir by pressing the gun into Blaylock's hand to fake a suicide and then trying to pin the shooting on Carl—it's contemptuous. Religious emotion is meaningless to the filmmakers, so they make it meaningless to the characters, and make Fundamentalist Christianity a backdrop lacking in enough detail to make it a milieu.

The mechanics of Salvation Boulevard veer uncontrollably between those of the paranoid thriller and the zombie picture, with Kinnear pursued by an implacable and bloodthirsty cabal bent on his destruction for the glory of the church. A half-baked subplot involving a Mexican Mafioso features too many references to Deadheads (last I checked, Jerry Garcia had been dead for 16 years), but is given lovely form by the always fun Marisa Tomei—though she's stymied here, like all else, by the writing.

Salvation Boulevard is fortunate in having the inherently likable Greg Kinnear at the center of the action—a comic with real acting skills who keeps up with all the tonal shifts where the screenplay lets him. There are a handful of other solid turns, especially from Jennifer Connelly, who proves miracles can happen by somehow making the vicious and bigoted caricature that is Carl's devout and fanatical wife into something intermittently recognizable as a human being.

At Sundance 2011 where Salvation Boulevard first appeared, Kevin Smith's anti-Fundamentalist horror film Red State got all the ink, but in its own way Salvation Boulevard is probably more objectionable. Whatever else one might say about Smith, he takes issues of faith very seriously, and he knows them from the inside. Salvation Boulevard is a gloss made by filmmakers who don't even consider Fundamentalism a worthy adversary. It's like watching a bully pick on a kid he thinks is defenseless, or maybe a blowhard telling the story of a bar fight that never happened. You can't really land a good satiric sock on a wholly imaginary jaw, now can you? Unsalvageable.