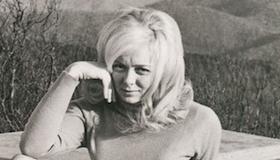 Errol Morris' newest documentary, Tabloid, gives a tawdry subject even tawdrier presentation, and proves evil and banality both love a spin in the media machine. Morris made a name for himself in 1988 with The Thin Blue Line by controversially using dramatic re-enactments to depict a police shooting from 1976. His then out-of-fashion technique offended those who argue that documentary should present an unadulterated cinematic and historical Truth; still, he freed an innocent man from Death Row. Since then his techniques have gone from questionable to common docu-parlance. Tabloid sidesteps re-enactment but, exploring a case also rooted in the late 1970s—this one dubbed "The Case of the Manacled Mormon" by the British tabloids—has its way with the notion of accurate reporting. It's a real-life drama spun into supermarket gossip, then spun again by Morris into a story of scandal, snide asides and exhibitionism. Morris doesn't name villains but he'll be damned if you can name a hero. Gripping, offensive and bewildering, Tabloid is a mean-spirited masterpiece. Given the Morris brand, numbers will be comparatively fantastic for this low budget documentary. Exhibitors have but to advertise.

Ex-pageant queen Joyce McKinney fell in love with Kirk Anderson in college. Though he loved her back (at least, according to her), his Mormon family opposed his plan to wed outside the church and sent him to England to separate the two. McKinney tracked Anderson abroad and using male accomplices literally stole him away for a weekend of extensive and fraught deflowering. Anderson wouldn't be interviewed, but McKinney claims then and now that the couple "made" relentless "love" of dubious consent that involved prayer, deep bonding and spread-eagle bondage so he could passively absolve himself of their lust. Guilt ridden, Anderson went back to his church and family and McKinney became the center of a tabloid maelstrom that revealed her true calling as media magnet. Her charisma even enslaved the British journalists whose attempts at uncovering the truth got tangled in her long blond hair. The result was a drama so chameleon-like it couldn't be confined to the pages of any one rag—and even Morris seems to wrestle with bending it into shape, taking detours into everything from Mormon sacred underwear to Korean pitbull cloning. That last bit you had to expect just a little ... Tabloid was made by the man who introduced us to Vernon, Florida, the pathos of pet cemeteries and Raymond Mendez, naked mole-rat specialist.

Morris' adversarial relationship with the conventions of documentary always plays a clever role in his films. I wish I could say he takes a lot from the trash pop docs on cable, but in reality, he's the one those trash docs mimic. Here, Morris dices fake newspaper headlines to look like hostage notes and drops scrapbook style picture frames on snapshots that could amount to character assassination, if you took them at face value. Tabloid owes a lot to the conflict of religion and sex (and how the media exploits its taboo sacredness for its own gain) but it's also an underhanded treatise on consent, a subject Tabloid proves is under constant revision. Was McKinney a rapist or a romantic? (She dismisses the accusation of rape, saying it'd be "like putting a marshmallow in a parking meter.") What Morris believes is uncertain. What's sure is the fabrication required to represent this dodgy story and the conditional compliance of the film's subject. Morris takes McKenna for a ride she herself condones—even in the '70s, she played along and posed for cheesecake shots for the Brit papers. Records of McKinney's boycotting the film and declaring Tabloid's misrepresentation stand as fitting anti-promotion for a film that takes pains to expose every level of fact only to question even the existence of Facts. Entertainers always entertain at a price, and my money says McKinney knows that better than anyone.