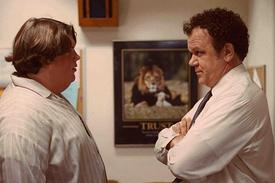 A bullied kid forges an unlikely alliance with a school vice principal, opening up a world heretofore closed off to him in Terri, an offbeat teen dramedy with an eccentric teen hero and a lot of heart. Momma's Man director Azazel Jacobs' funny and poignant film premiered at Sundance as part of the U.S. Dramatic competition, a run-up to its theatrical release, which hopes to capture that large segment of the audience that remembers its own alienated youth.

Terri (Jacob Wysocki) is a large kid, whose size makes him an easy target for bullies and at least one mean-spirited gym teacher. So disengaged from the high school experience that he's taken to coming to school in his pajamas, he's a loner and indifferent to his studies. His home life with his Uncle James (The Office's Creed Bratton) is not much better, since his uncle has developed Alzheimer's effectively thrusting the teenager into the role of parent. That is the status quo until the day he is called into Vice Principal Fitzgerald's (John C. Reilly) office. It's a small gesture from an administrator who is a little odd himself, but one that has a huge ripple effect on a loner like Terri.

Terri is primarily a character piece. Wysocki, who co-starred on the ABC Family series Huge, makes an impressive big screen debut, playing Terri as a sweet kid with a well of sublimated anger who has outbursts as cruel as any bully's. Bridger Zadina as Terri's fellow outcast and Rescue Me's Olivia Crocicchia as a one-time cool kid turned object of contempt are equally fine in support, as are Reilly and Bratton playing what passes as Terri's support system.

There are exaggerations of real high school experience, certainly, but it is clear that screenwriter Patrick Dewitt, adapting his own short stories, remembers those teenage humiliations well. Jacobs' low-key direction fits the material comfortably. The tone is deceptively light, but there's some real pain in Terri's interactions with the world and some real joy in watching him discover that life doesn't always have to be that painful. There are a few laugh-out-loud moments in the movie, but most of the humor is subtle and often bittersweet. Within the quirky universe that Dewitt and Jacobs create is a certain familiarity that makes the rooting interest in Terri that much more intense.