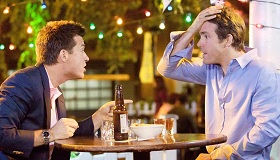 To comedy lovers disappointed by a decade of Adam Sandler getting kicked in the nuts, The Hangover was a welcome spray of champagne to the face, a truly startling, careening flick with jokes that dodged and then doubled back to sock you in the kidney. Writers Jon Lucas and Scott Moore weren't interested in retreading for The Hangover 2—why cover the same shocks twice?—so instead they set themselves up for a tougher challenge: injecting surprise into a genre that died when Judge Reinhold traded physiques with Fred Savage. If the trailer for The Change-Up looks bad—and it does—it's because Universal saved all the jokes for the actual movie. Audiences who brave it opening weekend won't be large, but with luck they'll spread the word that it's a far, far better comedy than anyone expects it to be. Hangover numbers are impossible for this body swapping burlesque, but Universal should be able to afford more than one round of drinks to toast their team.

Jason Bateman and Ryan Reynolds are apt casting for a harried, married lawyer and the softcore straight-to-DVD actor who've somehow been friends since third grade. (You know, when Reynolds was 18 months old.) Both actors have teetered into typecasting: Bateman has the patent on tense do-gooders and Reynold's cocksure confidence is on the verge of self-parody, rescued only by his self-awareness—he's like a young Tom Cruise if young Tom Cruise had had a good therapist. When Bateman and Reynolds switch bodies, both actors know exactly what stereotypes to channel (unlike, say, if the film had cast Justin Bartha and Chris Evans) but neither is lazily dialing it in. Bateman's out to show his evil streak, even if he has to be another man to prove it, and Reynolds donates his charisma and some truly odd line readings: pausing, widening his eyes, making you wait for the joke before he casually slaps you across the face with it.

And so here, at the start, we have Bateman padding around in tasteful loafers while Reynolds stumbles through his big boy nursery, a loft that's brightly painted in primary colors and littered with man toys like bongs and ping pong paddles. After 10 minutes of expository dialogue, we glean the basics: Bateman is a workaholic on the cusp of a big promotion. Reynolds is a floundering actor whose biggest role was a commercial for baloney. And then the two switch bodies after a night of tequila shots. After a bout of public urination and ironic mystical wind chimes and Reynolds/Bateman—let's call him Reyman—wakes up in Bateman's bed next to wife, Leslie Mann (smoking hot and sad-eyed) to the screams of his mate's twin toddlers. "Holy f--knuts! Who's f--king kid is that?" he screeches and we're off as the dudes stumble around like newborn colts in search of sex and self-respect.

It's so effing nice to hear real swears in an R-rated flick. And even better to hear them flowing from Bateman's buttoned-up mouth as he summons his inner pig. Director David Dobkin embraces his rating: there's big tits, small tits, fake tits, old tits and pregnant tits—something for everyone! There's a baby's gaping, flexing rear end no more than 120 seconds into the film—not something for everyone. The shocks are frequent and funny and the best ones gleefully dismantle our taboo against hurting children. Bateman's twin toddlers are kamikaze kids: the girl throws knives and plunges her hand in a blender, the boy bludgeons his head against his crib as a stress reducer. In turn, Reyman flings them around the house like he's training them for the Moscow Circus. And one of the biggest cheers comes when the oldest daughter slugs another ballerina during a dance recital. (No offspring were harmed in the making of this movie.)

We know the drill: eventually the men must decide their real lives are better. But in the 90 minutes before the big hugs climax, The Change-Up stays brave with its premise. When Bateman is transplanted into Reynolds' body, he dabbles in private parts philosophy—is his penis by any other name still his penis? And if he uses it, is it cheating? Jaded by faux-daring flicks like Hall Pass, where men always return to the safety of the hearth, you'd expect Bateman's itch to philander to be all bravado until someone calls his bluff. But he's seriously ready to sleep around—and with perfect 10 bait like Olivia Wilde, a lawyer who gets tattoos to commemorate the first date, how could he resist? Reynolds-as-Bateman has less to prove, but has some very funny bits when he swaggers into Bateman's law office intending to impress the partners with lines he picked up from bad John Grisham movies. His concept of adult work clothes is gleaned from reruns of Dallas. Stuck with the less sexy maturity arc, his character has balls only when he brags to the real Bateman that he can't wait to bone his wife.

Despite all the boobs, The Change-Up is very fair to its female characters—well, at least to Mann and Wilde, who both ring true, even if Wilde is almost too good to be true. (C'mon, she loves legal briefs, stilettos and baseball?) Even Mircea Monroe, as one of Reynolds' regular conquests, saunters into her one scene solely to pounce on his inner Bateman, but gets to close out her comic bit with a reveal that under this sexual fantasy is a woman with feelings. It sounds like a trifling detail, but those details are sorely missing from most "date movies," in which even the women laughing in the audience exit feeling like they're the butt of the joke.

After playing out every possible gag in their situation, Dobkin has to wrap this all up in time for an ending. You know what that means: montages! But the fast forward is forgivable since he spent the rest of the running time on laughs. Will The Change-Up make you a better man? Iffy. Will it make you a date night hero? Absolutely.