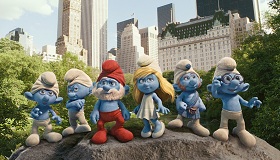 Looking at the obnoxious TV ads for The Smurfs, it's easy to dismiss the film as a shrill, joyless exercise in special effects without substance. It's even easier after actually seeing it. Directed by Raja Gosnell, who's carved out a career as a purveyor of family-friendly entertainment, this live-action adaptation of Peyo's iconic cartoon series is the living definition of perfunctory, a candy-coated lesson dispenser that's even more bland when it's trying to be hip. Expect young ones and their unlucky parents to turn out in droves for this soul-deadening distraction, while the rest of us can thankfully ignore its existence after it makes a swift transition onto DVD.

Neil Patrick Harris (TV's How I Met Your Mother) plays Patrick Winslow, a father-to-be with his puppy-cute wife Grace (Jayma Mays) who inherits a job as head of marketing for a cosmetics company when his mercurial boss Odile (Sofia Vergara) fires his predecessor for, "Giving her what she asked for, but not what she wanted." His first assignment? Come up with a successful pitch for their upcoming make-up line-in three days.

But no sooner does he sit down to brainstorm brilliance than he discovers the Smurfs, a sextet of pudgy blue creatures with a penchant for mischief who have magically teleported from their world to ours. Athough they mean well, the Smurfs quickly disrupt Patrick's life and put doubts into his head about impending fatherhood. But when the cranky wizard Gargamel shows up looking for his little blue buddies, Patrick is forced to decide between preserving his job and protecting the Smurfs.

After Cars 2, The Smurfs is the second movie this summer to suggest that all people should be themselves and stay true to who they are, no matter what. Much like the unfortunate Mater the Tow Truck, Clumsy Smurf exists only to screw everything up for everyone else-and never receives even a hint of a suggestion he should be more careful. This endless display of fecklessness grows tiresome six seconds into the movie and eventually blossoms into being fully unbearable by the time the screenwriters give the character an undeserved (and unbelievable) opportunity to redeem himself by turning that selfsame shortcoming into a virtue. If you don't wish for Papa Smurf's premonition of a disastrous fate for Clumsy to come true, you're a better person than I am.

You have to give credit to Neil Patrick Harris for even trying to give his character and his storyline some substance, since the movie certainly didn't need the effort. But The Smurfs does irreparable damage to any real emotion that Harris might have created, and Hank Azaria's buffoonishly over the top Gargamel reduces the rest of the human characters to the complexity of a Saturday morning cartoon. (As Harris' wife, Mays' indefatigable, one-dimensional perkiness doesn't lend any gravitas to Patrick's paternal dilemma.) By the time the filmmakers are blasting The Black Eyed Peas over a department-store chase-which happened either before or after The Smurfs perform an abominable cover of "Walk This Way," I was already blacking out from the pain-even the most minor emotional identification with anyone in the film is long since gone, and only those enchanted by the presence of talking blue toadstools will find a reason to care about what's happening with the plot.

In fact, so rancid is The Smurfs from start to finish that even the presence of a gloriously cartoonish Sofia Vergara plus Project Runway paterfamilias Tim Gunn couldn't save even a few scenes from the cinematic scrapheap. (One can only imagine that "Make it work" was a daily mantra uttered by the crew on set. Unfortunately, they never did.) Maybe The Smurfs just isn't for anyone over a certain age. Be grateful if you fall into that choice demographic. Because if you can choose, drive to and pay for The Smurfs of your own volition, it's possible that you might still need adult supervision.