close
Sarah Palin hagiography is neither fair nor balanced 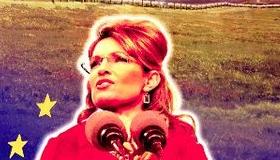 The Undefeated says less about Sarah Palin than about the political and cultural environment that made her big screen beatification possible. Right wing radio and cable news was built on the premise that vintage media is a tightly organized plot to advance liberal interests and that Republicans needed a place to collectively receive the latest anti-left and pro-conservative thought. In radio and cable news, their efforts have been incredibly successful. In 2008, Hillary: The Movie was the Internet era's first notable attempt to release a biographical documentary into theaters that was pure political propaganda. While that unapologetic Hillary Clinton cheap shot became more noteworthy for the court battle that resulted, any notoriety for The Undefeated will come from the unprecedented fealty it shows its subject. The movie, directed by Stephen K. Bannon, is being released in the ten strategically selected cities where Palin fans are most likely to unwrap themselves from their American flags long enough to hear 118 minutes of "evidence" that Palin is the most flawless politician who ever lived. It serves the historical record only as example of how many Americans have come to believe that the traditional role of the press to question authority isn't just part of the liberal conspiracy, it's patently unpatriotic. In fact, even if Palin were a Democrat, The Undefeated should be vilified by those who respect the documentary form. A slick and polished dog whistle for those attuned to its message, box office results will be decent for a film of such limited marketing means.

Unlike any film in memory, audience turnout for The Undefeated is dependant upon bad reviews. There is no better way to court favor with the right than by attracting opprobrium from the elitist, college-educated left. Distributor ARC Entertainment has been providing screening opportunities for critics in big cities that are outside areas where the film is being released. In effect, bad reviews are being courted for use as proof of the film's truthiness. With its wall-to-wall bombastic music, selective memory, unanalyzed facts and hagiographic tone, The Undefeated was destined to be shredded by critics foolish enough to expect more from it than hero worship. Even George Washington, as noted in many documentaries, owned slaves. Here we are meant to believe that Palin has never taken a political misstep in her entire career. Indeed, a major component of Palin's appeal comes from the idea that she has stood up to the entrenched media, a supposedly monolithic force willfully ignoring her manifest political virtues so they can obsess about her destruction (the film's title is certainly a reference to, hold your laughter, surviving such an unconscionable mainstream media onslaught). Probably the most ridiculous image in a film replete with ridiculous images is the shot of a pride of lions chasing down and eating a poor, defenseless zebra. In the doc's opening montage, those lions are introduced as comics and talk show hosts like Rosie O'Donnell, Bill Maher, Howard Stern, Roseanne and David Letterman, all indulging in Hollywood's "new favorite pastime," beating up on the wilting flower from Wasilla.

If there's anything that'll grab the attention of right wing audiences faster than the slings and arrows of outraged liberals, it's the invoking of religion. Bannon, in what would be a joke if not taken so seriously, sprinkles his one-sided narrative with passages from the Bible. In this telling, Palin isn't just a soccer mom turned politician, connecting with the average American using her folksy combination of plain-spokenness and small town moxie. She is, in the words of one booster, fighting a "spiritual battle" where her foes aren't just comedians and MSNBC hosts, they are Democratic Hell spawn intent on destroying the very embodiment of righteousness that is Sarah Palin. The religious framing of Palin's efforts to outlast her enemies and "take back America" further disqualifies The Undefeated from being a serious analysis of her political career, as if it ever meant to be one. That career was only vaguely interesting until her surprise anointment as John McCain's 2008 vice presidential nominee. Utilizing audio excerpts from Palin's autobiography Going Rogue: An American Life, we are told (in "Act 1: The Servant's Heart") of her win as Wasilla mayor in 1996 over three term incumbent John Stein. Her tenure in the small town, which extended through a second term, was highlighted by the paving of roads, the opening of a Wal-Mart and a decrease in local government spending. Bannon then launches into an endless dissection of the career passage Palin constantly cites as proof of her outsider status. In 2003, she was appointed to the Alaska Oil and Gas Conservation Commission and later was named its ethics supervisor. Within months, she would file ethics complaints against oil and gas regulator Randy Ruedrich, who was also chairman of the state's Republican Party. Palin argued that Ruedrich was seeking campaign funds from the very industry he regulated and in November 2003, he resigned. In 2006, Palin won Alaska's gubernatorial election, defeating former Democratic governor Tony Knowles. In August 2008, she was named John McCain's running mate in that year's presidential election. After her loss to Barack Obama, Palin returned to the governorship of Alaska where in 2009 she resigned rather than fight ethics complaints that Bannon unsurprisingly deems "frivolous."

In recounting these events in the most flattering, least objective way imaginable, Bannon uncorks plenty of old video and snippets of local news reports. He also lines up a mighty array of Palin supporters who celebrate her recent Tea Party ascension in terms that are nothing short of patriot porn. At one point, she is lauded as a warrior taking up "the battle cry to fight for freedom." Bannon also condescends to Palin's female supporters, advancing the meaningless notion that Palin is "a real woman who lives a real life." Best is conservative blogger Andrew Breitbart who claims that attacks on Palin prove that "men no longer have a sense of chivalry," a fascinating assertion from the man who forced Shirley Sherrod to resign from her post with the Department of Agriculture by admittedly editing footage out of context to paint her as racist. However, to systematically refute each example Bannon uses to burnish Palin's obviously bulletproof credentials is not worth it. If he wants to make a movie where he lionizes Palin and shamelessly cherry picks the events of her career to advance her political fortunes, he can do that (although he may want to take the Bridge to Nowhere to meet Palin's ex-brother in law to discuss the Katie Couric interview that helped drive her into the coddling arms of Fox News). If he wants to foment hatred towards the left by implying that nasty and anonymous message board comments about Palin represent everyday liberal thought, he can also do that (although he may want to check some of those anti-Obama comment boards someday). If he wants to cry victimhood because those big, bad Hollywood liberals won't give Palin the free pass he so gracious grants her, he can do that, too (although he may want to remind himself how Bill Clinton was skewered nightly during the Monica Lewinsky scandal). The problem is ultimately not Stephen K. Bannon and his horrible excuse for a biographical documentary. It's not even Sarah Palin. The problem is a populace so adverse to contrary opinions that we're not as well informed as we believe. When a candidate or office holder is asked a tough question by a reporter, the faithful cry partisan politics. Agenda-pushing mixes with objective thought so thoroughly that many can't tell the difference and have stopped assuming there is a difference. Nowadays, many simply ingest whatever information confirms their existing beliefs and everything else is huffily dismissed as a product of brainwashing and ignorance born of too much MSNBC or Fox News. Of course, what happens when (un)informed voters circle their political wagons so tightly that no amount of daylight could possibly open their eyes? We get Sarah Palin. And The Undefeated.