close
Lock the cage and throw away the key 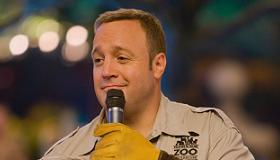 In 1995, Babe set the standard for talking animal movies, even winning a Best Picture Golden Globe (Comedy or Musical) plus an Oscar nomination in the top category. Zookeeper isn't going to change the status quo. Almost totally devoid of charm and genuine laughs despite the presence of star Kevin James and a wonderful veteran voice cast for the creatures, this labored comedy about a caretaker who gets romantic tips from talking zoo animals is sprung from the Adam Sandler factory of predictable pee pee jokes and stupid slapstick setups. Family audiences might tentatively stick their heads in, but indifferent word of mouth will make the flick's long term theatrical hopes more painful than a porcupine.

James plays Griffin Keyes, a hapless romantic dumped by the (shallow) girl of his dreams (Leslie Bibb) despite an elaborate proposal of marriage. Cut to five years later. Griffin is now a hapless zookeeper who discovers the animals can talk. Confessing his lameness with women—particularly the one that got away—the animals endow him with love advice based on their own experience. A couple of scenes are actually funny, particularly a lesson from Sebastian the Wolf (Bas Rutten) who demonstrates the importance of "spraying" your territory. Typical of most Sandler productions, of course, the writers spoil the joke when Griffin decides to imitate the lupine seduction move on a decorative tree planted smack in the middle of a swanky restaurant. Yuk, yuk. Another scene-gone-overboard finds him flying from the drapes with attractive and sweet fellow zoo employee Kate (Rosario Dawson) until he inevitably takes things too far and ruins a wedding by crashing into the bride and her ice sculpture. (Just one of at least four scenes where James takes elaborate stunt dives in the name of "comedy.") Thank god for the fine CGI and live action animal work which makes any of this stuff bear-able.

Leading the terrific voice cast are Sandler's as Donald the Monkey and Nick Nolte's touching portrayal of Bernie the Gorilla, an abused ape who has lost faith in the human race. Other standouts are Joe the Lion (Sylvester Stallone), Janet the Lioness (Cher) and Barry the Elephant (Judd Apatow) at least give this hokey enterprise a decent chance, even if they're underused. Leslie Bibb's vacuous, would-be fiancee is stereotypically one note and you have to wonder why this guy would be longing for this money-grubbing bimbo when Rosario Dawson's sweet Kate is obviously there for the taking? Also wasted are Donnie Wahlberg as a fellow zookeeper who mistreats the animals and The Hangover's Ken Jeong (what isn't he in this summer?) who's meant to score easy laughs, but doesn't actually get any.

With these talents, Zookeeper could have been a contender, but it keeps falling prey to the worst comic instincts of its creators. Plus the product placement is garish—especially an overlong setpiece when Bernie convinces Griffin to take him on his dream vacation...to a T.G.I. Friday's. The sole plus side is Zookeeper's compassionate, anti-cruelty animal rights message. Hopefully that will be the one thing its young audience remembers from this otherwise misguided visit to the zoo.