close
How I learned to love the bomb 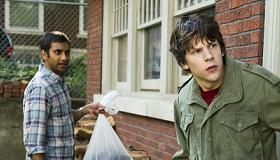 In a summer full of comedies featuring so-called "risky" subject matter, 30 Minutes or Less is the first one that feels fully dangerous. Director Ruben Fleischer, reuniting with his Zombieland leading man Jesse Eisenberg, turns real-life tragedy into tense, thrilling fun with a tale of a pizza delivery man recruited against his will to rob a bank. Squaring off against Final Destination 5 for dominance at the box office, Fleischer's film faces an uphill battle during its theatrical run, but expect greater rewards for the film on home video and VOD as its odd charms are discovered.

Eisenberg plays Nick, a restless twenty-something with few accomplishments and even fewer ambitions, save for getting his pizza pies into people's hands in under half an hour. After a falling out with roommate Chet (Aziz Ansari), an elementary school teacher furious to discover that Nick had sex with his sister Kate (Dilshad Vadsaria)—and worse yet, gave him the gory details under false pretenses—the delivery man seems destined to hit bottom.

But then Nick's fortunes get even worse. Scheming idiots Dwayne (Danny McBride) and Travis (Nick Swardson) need cash to pay a hitman to off Dwayne's father for his inheritance. Their plan? Strap a bomb onto the pizza boy with a timer that will explode unless he robs a bank by sundown. Armed and dangerous against his will, Nick is forced to recruit a reluctant Chet to help him carry out his mission, a task that gets further complicated when the hitman Chango (Michael Pena) shows up in town looking for the money he's been promised.

If they weren’t transparent from the film’s first frame, about two thirds of the way through the movie there’s a Glenn Frey musical cue from Beverly Hills Cop which should immediately alert audiences to 30 Minutes or Less’ ‘80s buddy action movie influences. But the noteworthy aspect of this film’s sense of cinematic nostalgia is that it retains the sinister edge viewers experienced when they watched its predecessors. Although Eisenberg and Ansari’s antics here are decidedly sillier than, say, Mel Gibson’s suicidal leanings in Lethal Weapon, they share a palpable sense of danger that permeates even casual exchanges.

Although Danny McBride deserves only faint praise for finding new shades in the same character he's played in too many movies, 30 Minutes or Less feels like the first film that really uses his reckless-asshole persona to create real peril. As a half-witted criminal mastermind, McBride exu—des an admirably stupid fearlessness that gives Dwayne's plan a odd believability—he's a comic villain we can semi-realistically root against. As his partner Travis, Swardson gives a thanklessly stupid character surprising humanity, showing that he's capable of more subtle work than the broad comedy he's contributed in Blades of Glory or I Now Pronounce You Chuck & Larry.

Eisenberg brings a predictable, nervous energy to Nick while Ansari does his usual manic schtick, but as he did with Eisenberg and Woody Harrelson in Zombieland, Fleischer roots these larger-than-life personas in a substantive—if not fully serious—context. Eisenberg is doing actual acting. He's incapable of restraining himself from playing things as realistically as possible, but it's to the movie's benefit that he is at all times panicked and fully freaked out by the dynamite welded to his chest. Playing off Eisenberg's straight performance, Ansari holds his own and his trademark asides give their scenes more momentum that just a motormouth commentary on the absurdity of the situation.

At barely 80 minutes, the film seems like a slight little adventure, but Fleischer fleshes out his twists and turns to make it feel like a fully-rendered story. When compared to other "daring" fare like Horrible Bosses, which was too fearful of making its leads unlikable to embrace the blackness of its kill-my-employer concept, 30 Minutes' go-for-broke brashness gives it the edge among folks who think studio comedies are typically too tame. As a wind-down from summer fun, or simply as a follow-up for Fleischer and Eisenberg, 30 Minutes or Less fully delivers the goods. Future projects of all involved will be worth the price, no matter how long they take to arrive.