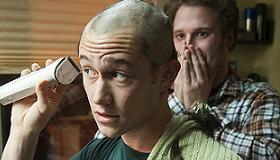 A soft and sweet cancer drama that hits with the force of an ill-timed hug, 50/50 is the winsomely told story of a young man blindsided by his own body and the ways in which his inherently lonely struggle upturns his life. Working from an autobiographical and aggressively competent script by Will Reiser, director Jonathan Levine (The Wackness) smoothly realizes this memoir as a modest production that's disarmingly relatable in part because of its generic look. Appealing performances compensate for the network TV aesthetic with Joseph Gordon-Levitt and Seth Rogen leading an impressive cast of famous faces that—presumably bolstered by strong reviews—could help this charming yet disposable dramedy to score with adult auds who aren't afraid to laugh in the face of death.

Gordon-Levitt is Adam, a stringy wet noodle who's primary frustrations—the sudden disinterest his artist girlfriend (Bryce Dallas Howard) has in sex, the consistent disinterest his Seattle Public Radio boss has in Adam's stories, a finite supply of adorable pea coats—have recently been accented by a nagging pain in his lower back. A doctor with the worst bedside manor this side of Josef Mengele informs him that it's cancer—a nasty kind, with lots of syllables—leaving Adam dazed and in desperate need of a loving ally. Howard can't handle the job. Fortunately for Adam, his best friend Kyle (Seth Rogen) is a secret weapon of coarse compassion who channels his affection through an Apatovian string of crude jokes and pop culture references which make their point even when they miss their mark. (Kyle's supposedly affirming list of celebrities who beat cancer includes Patrick Swayze.)

Reiser's methodical script prizes function over expression, a fault common to first screenplays, yet one more profoundly felt in an autobiographical effort. It's quick to litter Adam's battle with eccentric supporting characters who have a plain plot-driving purpose. Anjelica Huston is Adam's nagging mother who expresses her love with a maternal severity. Her first reaction to the diagnosis is to move in. Adam's father is deep in the throes of Alzheimer's—perhaps a true-life touch, but one that nevertheless feels gratuitous until it's justified by a single line of dialogue at the end of the second act, a long-form call and response that doesn't fumble its emotional impact.

In the mentor role, we have Philip Baker Hall as a gleefully grizzled cancer patient, while Anna Kendrick belabors the point as Adam's insufferably uptight support counselor, a rookie romantic foil who hasn't yet learned to treat her patients rather than their disease. But it's only Bryce Dallas Howard—once again imbuing a vaguely sinister character with a rumple of simmering dimensions—who is able to unloose her character from the confines of its function. As Adam's half-hearted girlfriend, she draws a distinction between being an emotionally unprepared companion versus a wicked shrew, elevating a role that's scripted merely to be a load of dead weight who exists just so the hero can prove he's able to thrust her off.

Indeed, the supporting roles do so much of the film's heavy lifting because Adam is a blank slate, a guy who doesn't seem shell-shocked by his diagnosis—he seems erased completely. The mute passivity with which Gordon-Levitt embodies the character makes for an endlessly sympathetic hero, of course, but nondescript kids are a lot easier to cry for than remember. Gordon-Levitt is a great straight man to Rogen's hysterical comic cure-all—their need to rely upon one another is movingly organic and unspoken, and most of their scenes together are as sweetly haphazard as the rest of the film is casually calculated. Ultimately, it's that schematic nature that makes 50/50 such an odd entertainment. Reiser and Levine obviously understand that cancer is messy business, yet their film is no less tidy than an episode of House.

It's not as if Reiser's story would have benefited from a mess of melodramatic twists, but this is a film that clearly tries to humanize the great battle of our age, a fight that our narratives so often render morbid and didactic. Tonally, 50/50 seems committed to reflecting the wild emotional spectrum of an adventure for which it's impossible to prepare, yet the inertia with which Adam's fight unspools flattens the film's refreshing sincerity. Like feral jazz forcibly submitted to the restraints of top 40 radio, it ultimately plays by the book.

Having said that, 50/50 captures the strange isolation of death better than any film in recent memory, save for perhaps How to Die in Oregon. That may not make for much of a pull-quote, but the title of Reiser and Levine's film doesn't just convey its hero's odds for survival, it's also an equation for a dangerous journey well-traveled, deducing how the burden of Adam's cancer is balanced between himself and those who love him. A fight like this is a lonely thing, and Adam is quick to identify and shut out the people in his life who instinctively leap into the trenches alongside him. Even if 50/50 fails to resonate beyond its running time, it musters a palpable and tear-tugging strength from the precious understanding that everyone may die alone, but we all live together.