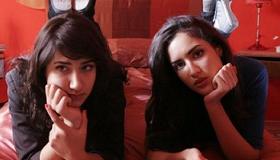 Coming off a strong run at festivals, where it picked up an audience award at Sundance as well as other prizes at gay-themed fests, Circumstance is a drama of depth, nuance and ambition. In it, two teenage girls explore their mutual attraction against the backdrop of a culturally oppressive Iran. The fiction feature debut for writer/director Marayam Keshavarz, an academic and documentarian, Circumstance demonstrates raw talent and a taste for big ideas. While the market for Persian ex-pats would seem a given, the film could do some business with gay audiences too, and based on its festival pedigree it could even potentially crossover to slightly broader arthouse crowds.

The basic tensions in the story are set up cleanly and efficiently: Atafeh (Nikohl Boosheri) is from a protective, wealthy family, but her schoolmate Shireen (Sarah Kazemy) is the daughter of dissidents, and faces continual hardships as a result. Their attraction for one another grows as they explore the city's underground youth culture of parties, dancing, drinking and drugs. When Atafeh's brother Mehran (Reza Sixo Safai) returns home from drug rehab, he sets his sights on Shireen for himself and also falls in with the Morality Police, who enforce the cultural laws.

Keshavarz packs the film with small cultural details that might sail past Western viewers—example: women are not supposed to sing solo for others—but these details give the film an unmistakably authentic feel. Though it was filmed in Beirut for logistical reasons (it's nearly impossible to shoot in Iran), the locations communicate a vibrancy worth the effort.

The film's intimate moments are its best and Boosheri and Kazemy bring an unformed, youthful wildness to these close performances. (And for a high-minded film about cultural repression, there are some real window-fogging make-out scenes.) It's through the girls that the film best captures how Western cultural products influence perceptions all over the world. The girls lose themselves belting out "Total Eclipse of the Heart" alongside a television singing competition. Perhaps most tellingly, Keshavarz visualizes their fantasy lives as if from a glammed-up music video, glimpses of a mysterious women's-only nightclub and a gleaming seaside apartment for them to get busy in. Safai's Mehran is, by contrast, a character underserved by the story: when he uses surveillance equipment to spy on his sister, his character becomes villainous to a melodramatic degree, sticking out sorely from the film's otherwise nuanced portrayals.

There's a brief subplot involving some friends who want to dub Milk and Sex And The City into Farsi. The notion that all liberation movements are somehow linked, be it gay rights or broader political rights for all peoples, is particularly tantalizing but all too quickly cast aside. Meanwhile, it sounds odd to criticize Keshavarz for trying to pack too much into her debut, as if she was afraid that she might never have the opportunity to make another fiction film so she better get it all out now. Ambition like that can be tough to come by.

Even with its rough edges, Circumstance feels purposeful and put-together.