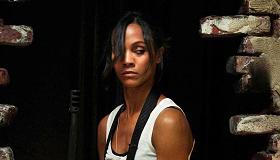 While most action films fall apart because they succumb to stupidity, Colombiana suffers most because it tries to be too smart. Luc Besson, having largely abandoned stateside filmmaking to carve out a cottage industry in France with film series like Taxi and The Transporter, aspires to export to Hollywood this next-generation version of The Professional. But as with many of his previous producing efforts, his focus on cool ideas and crazy set pieces overwhelms the effectiveness of character development and clear-eyed storytelling. With Don't Be Afraid of the Dark and Our Idiot Brother as its opening weekend competition, the film will have action junkies to itself, but expect this one to disappear quickly as more respectable—and better executed—fare storms theaters in September.

Zoe Saldana (Avatar) plays Cataleya Restrepo, a young woman who escapes Colombia for Chicago after a drug lord guns down her mother and father and points their machine guns at her. Tracking down her uncle Emilio (Cliff Curtis) in Chicago, she forces him to teach her how to be a killer and grows up to become a formidable assassin. Despite committing more than 20 murders (that we know of), the FBI has only one link to her: a drawing of her namesake flower, which she leaves on the body of each victim. But after Cataleya's "calling card" is leaked to the press, her parents' killers renew their pursuit of her in full force—which is exactly what she wants. But when her bloodlust puts her new family in danger, she's forced to decide between exacting revenge and saving the rest of her loved ones from certain death.

According to interviews with Luc Besson and director Olivier Megaton (The Transporter 3), the script for Colombiana started out as a follow-up to Besson's The Professional, the acting debut of a 13-year-old Natalie Portman and the highpoint of Besson's career. Though Portman is hardly an imposing physical presence as an adult, it's easy to imagine a grown-up version of her pint-sized killer Matilda picking off bad guys with ruthless efficiency. But as Matilda's stand-in Cataleya, Saldana is a lithe and intimidating figure, and the change of locale and back story lends her determination a degree of credibility that would have likely been absent from that imaginary sequel, especially since The Professional was more hopeful than this cruel catharsis. Where Jean Reno's Leon protected Matilda from the hitman lifestyle, Cataleya's uncle breeds her into it, and that single change gives Saldana's violence a gratifying inevitability.

There's little more to expect from a film like this than some sexy ass-kicking, and on that scale it delivers most of the goods. Saldana takes to the fight choreography like she was born to it and Colombiana doesn't waste energy trying to make her unnecessarily super-heroic when it comes to squaring off physically with her opponents. She's a slender shadow who sneaks up and shoots—not a Salt-esque superhero—and the film embraces her limitations. And the story as a whole is almost refreshingly simple, straightforwardly chronicling the repercussions of Cataleya's determination to avenge her parents' deaths. But as is the case with many of Besson's stories, it fails to distinguish the difference between clever and smart, ultimately undercutting its own effectiveness by bogging the audience down in plot developments that add no narrative complexity.

The worst example of this sort of over-thinking is the process by which the authorities actually figure out the identity of Cataleya. If the miraculously advanced technology that allows the FBI to scan through a database of photographs and match them by mapping body parts like fingers and arms wasn't absurd enough, there's the chain of events that puts a photo of her in their hands: the domino effect requires screw-ups from her lover, his friend, and his friend's friend. I have no doubt this technology exists today. Still, it seems hard to believe that a random FBI agent would have it at his disposal, and then be using it at precisely the moment a picture of his suspect was uploaded to the worldwide police database. Such quibbles are of negligible importance when they're only interstitial material for the plentiful fight scenes, but the film's lackadaisical momentum leaves the audience with too much time to ponder the myriad ways in which it's implausible, if not plain ridiculous.

Like the other filmmakers in Besson's stable of directors, Megaton knows how to shoot action stylishly, and he certainly cultivates a love affair between his camera and the indisputably gorgeous Saldana. But he lacks the sort of commercial hunger—or maybe the creative ambition—to give a story like this the urgency or sense of spectacle that it requires. Instead, he achieves a glossy, familiar proficiency without adding anything extra to its cinematic arsenal. As a result, Colombiana lives up to the title of its would-be predecessor—it's professional—but it seems to share little else in common other than a leading lady who will unquestionably go on to bigger and better things, and a director who might not.