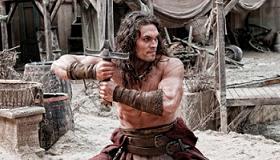 Comprised only of massive, bloody set pieces, Conan the Barbarian is proof that action fans should be careful what they wish for. Conceived from the remnants of what someone might think they want a Conan movie to look like—but without any thought given to characterization, plot or coherent staging—director Marcus Nispel's reimagining of the comic book icon is, with few exceptions, a complete disappointment. Between Conan and Fright Night, the big-boy box office may battle to a draw allowing Spy Kids 4 to steal first place.

Conan is a Cimmerian warrior who is literally born on the battlefield. (14-year-old Leo Howard plays him as a boy.) A natural fighter, he develops an aptitude for strategy—and brutality—at an early age. But when his father Corin (Ron Perlman) is slain before the child's brooding eyes, Conan devotes his might to taking revenge on the ruthless warlord Khalar Zym (Stephen Lang) who decimated his people and left his life in ruins.

That takes a while. It isn't until Conan attains adulthood and the staggering muscles of Jason Momoa (TV's Game of Thrones) that he stumbles across his lifelong foe. Khalar Zym is now intent on ruling the world by reassembling a mask that grants its wearer mystical powers. But Khalar needs a female monk named Tamara (Rachel Nichols) in order to fulfill the mask's prophecy, and when Conan discovers his weakness, he forces Tamara to join him on his quest, only to find himself moved for the first time by something other than revenge: her comely companionship.

Babes aside, Conan the Barbarian is almost all action. From the battlefield birthing scene to the climactic showdown, there's barely more than a minute of screen time that ticks by without someone being stabbed, slashed, or bloodily smashed on a rock. One suspects that the filmmakers realized at some point late into the production that they were drowning the audience in a bloodbath—to add gravitas and some sense of direction, they hired no less than Morgan Freeman to provide voiceover narration. But so propulsive is the violence that it looks like even the actors themselves are surprised when it stops; after Rachel Nichols smashes an enemy's head during a fight aboard a pirate ship, she seems stunned to turn around and find the rest of the crew already celebrating their victory.

The bigger problem is that the action literally bleeds together and there's no sense of pacing. Even the most impressive set pieces soon recede into the white noise of the film's wall of violence. Conan is in the worst possible way a one-dimensional hero: a man with one identity and one mission. Although he receives an early lesson from his father about the need for a balance between fire and ice (specifically referencing the steel of a good sword), Conan never changes. Notwithstanding the shred of sexy respect he develops for Tamara, he never learns anything, either. This absence of an emotional journey gives the film no discernible climax. Rather than failing, learning something and applying that knowledge to defeat his enemies, Conan prevails purely because he's arrived at the end of the story.

That said, Jason Momoa does a serviceable job lending energy and charisma to Conan, while Nichols is credible as a love interest who retains a tenuous sprout of female empowerment within the film's testosterone-heavy terrain. As the evil warlord, a role Stephen Lang has previously maximized even in thinly-drawn baddies like Avatar's Colonel Quaritch, he fails to do the same here—more a failure of lackluster writing than a dearth of personal effort. Truth be told, Lang's real problem is one of character motivation. Khalar wants to retaliate against his enemies in response to the loss of loved ones. So does Conan. And when two largely indistinguishable lead characters want the same things, but one is arbitrarily the hero and the other the villain, it's an irreparable problem which no amount of fighting can resolve-even with the portentous voice of Morgan Freeman narrating their clash.

As a fan of the original films, and the proto-masculinity advertised in their glorious, Frank Frazetta-inspired landscapes, I welcome future Conan interpretations. But even for a film about a character whose priorities are "to crush your enemies, see them driven before you, and to hear the lamentations of their women," this is purely barbaric.