close
Things that go “Yawn” in the night

Don't Be Afraid Of The Dark 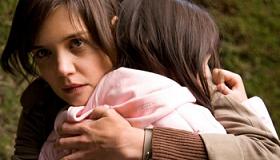 With master filmmaker Guillermo del Toro as co-producer and co-screenwriter, this by-the-numbers adaptation of the 1973 ABC telefilm of the same name has the elements in place to climb out of its genre just as did del Toro's own Oscar-winning Pan's Labyrinth. Blame director Troy Nixey for lacking the touch, or blame the basic material which is better suited to TV—either way, Don't Be Afraid of the Dark never gets you jumping out of your seat. On the shelf since Disney dumped it in their Miramax sale, a strong marketing campaign emphasizing the spooky house angle could get the horror flick some fair initial business, but we're Afraid this one is quickly headed to video stores to share space with its TV predecessor.

Stop us if you've heard this one before. The plot here revolves around Blackwood Manor's clueless new residents, architect Alex Hurst (Guy Pearce), his interior designer girlfriend Kim (Katie Holmes) and Alex's precocious young daughter, Sally (Bailee Madison). Alex and Kim are determined to restore the Gothic mansion to its former glory, but things that go bump in the night get in their way. The film rests on Sally's small, shaking shoulders—abandoned by her real mom and ignored by her otherwise-occupied dad, she out to explore the scariest, most forbidden corners of the dark mansion, a quest ignited when she hears odd voices from the basement where they whisper to the girl that they want to come out and play. At first, they don't really seem too threatening. But as Sally gets further into their lives, she's inadvertently unleashes hell on earth, as this ferocious band of ugly little monsters known as the homunculi (Latin for "little humans"—cute) threaten to destroy what's left of Sally's family. Despite her warnings, the adults don't really listen (of course, hey parents just don't understand) and she is left to her own devices to try and save her life.

Classics like The Innocents, The Uninvited and The Haunting, and even over-the-top popular entertainments like The Amityville Horror and Poltergeist have all played out this matieral before. Del Toro apparently thinks the original TV flick was the scariest movie ever, but better theatrical films had already bested it. Madison is a very good child actor but she's an actor and she's charged with making this all work. It's a capable performance, but the film would have been better served with a more natural, haunted-looking kid in the pivotal role, someone like Ivana Baquero from del Toro's Pan's Labyrinth. Plus, the only really eerie thing here is how much Madison looks like a young Holmes—she's her potential step mom, not her mom, but the uncanny resemblance confuses matters. Holmes is fine for what she's asked to do but Pearce seems to be sleepwalking. Special effects work, art direction and cinematography are all aces and contribute mightily to the only great thing Don't Be Afraid of the Dark has going for it: atmosphere. But under the smoke and antique mirrors, it's still just a pretender.