close
The pain and the glory 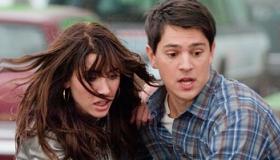 After ten years and five installments, the death-stalks-the-nubile franchise finds its gory groove with Final Destination 5. Directed by James Cameron protégé Steven Quale, the visual effects supervisor and second unit director on Avatar, it's the best 3D horror movie ever made, as much for its superlative technical merits as for its satisfying thrills. Crowd-pleasing and yet genuinely compelling, expect strong box office returns over opening weekend with fans steadying themselves for frightening fun that works in both two and three dimensions.

Nicholas D'Agosto (Fired Up!) plays Sam, a corporate drone who harbors not-so-secret aspirations to become a world-class chef, much to the consternation of his overbearing boss Dennis (David Koechner). En route to a company retreat, he has a nightmare of a bridge collapse that slays him and his co-workers-and in his panic inadvertently manages to rescue a few people just as the horrifying vision comes true. But at the funeral for those who lost their lives, a coroner named Bludworth (Tony Todd) warns that Death may have a grander plan for the survivors. As Sam and his buddies see their fellow saved live only to be killed off in increasingly unexpected and gruesome accidents, they race to to beat death and discover that one way to live might mean helping someone else die.

That all sounds familiar if you've seen any of the franchise, but even within the series, there have been delights and disasters. The previous Final Destination was a real mess—a goofy, gross and utterly brainless exercise in horror exploitation—which, to be honest, after four films is to be expected. Which is why Final Destination 5 works that much better: director Steven Quayle has crafted a clean, glossy thriller shot in native 3D (not post-conversion) that maximizes the technology without straining the audience's credulity or their constitutions. Calling anything the "best 3D horror film" has the ring of crowning the world's tallest midget, but Quale uses 3D almost shockingly well. From the opening titles—one of the single best sequences of any film all year—to the climactic disaster, he creates a vivid, clear and completely immersive experience that highlights the skills he learned on Avatar and lives up to the quality 3D experience promised by Cameron.

Final Destination 5 highlights the strengths of the original concept, which was in rapid decline. By the time The Final Destination (or The Four-nal Destination, as I like to call it) was released in 2009, the circumstances that led to each death were so calculated and improbable (c'mon, a car wash kill?) that these characters' imperiled lives lost all empathy. To execute its murderous designs, Death was betting on the blood lust—and more specifically, stupidity—of its audience rather than a convergence of well-conceived, vaguely plausible coincidences. Here, while repeated instances of shoddy workmanship (including a shocking numbers of loose screws) are to blame for several of the deaths, almost all of the "accidents" feel like they theoretically could happen, even if they pay off on a grand cinematic scale.

Further, the filmmakers have shrewdly chosen the instruments of death to be household objects like screws or needles, and then they target universal sources of discomfort like eyeball trauma. When audiences can't relate to the pain—say, when a girl is chopped in half by a slice of corrugated metal—the death becomes purely cartoonish. We laugh, not wince. But watching a girl tumble and land mere inches from an upraised screw creates a palpable sense of tension—anyone can relate to accidentally stabbing oneself with a small, sharp object. And that intimate, immediately recognizable catalyst only enhances the spectacular gore to follow, so viewers connect to both the relatable pain of everyday injury and the gory gratification of a well-constructed, larger-than-life set piece.

But most importantly, Quale nails that combination of serious and silly. Again, by part four, the violence and death had become patently ridiculous, punctuated by the glib dismissal of characters who cared only marginally more about their own demise than that of their friends and loved ones. But the self-seriousness of the original Final Destination felt appropriate for a story about a group of young people forced to watch everyone around them die in rapid succession. And here, it actually enhances the dramatic stakes of the characters' efforts to escape death. While the film never fully succumbs to maudlin introspection, there's enough gravitas to the survivors' agonizing anticipation for the audience to take their peril seriously.

That said, even after five installments, the filmmakers still fail to address the most intriguing aspect of the series' mythology: why does one of the characters always have a vision that only temporarily saves their lives? And this fifth film introduces a provocative new concept into the logic of the series—the doomed can theoretically save their own lives by sacrificing someone else's—but fails to explore it with any depth or purpose. But as a 3D experience and a well-executed (pun intended) thrill ride, the film is engaging, entertaining, and surprisingly thoughtful. As the summer season chills and audiences begin to migrate towards movies that thrill them with gore and, occasionally, suspense, Final Destination 5 is a great first step towards the horror months, as well as a fantastic demonstration of how even a flaccid franchise can regain its footing.