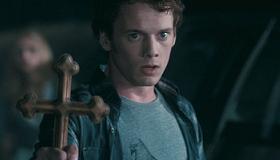 Tom Holland's 1985 Fright Night was a precursor to the horror deconstruction made trendy 11 years later by Wes Craven's Scream—a cheeky meta-genre work that both critiqued and celebrated scary movie contentions, albeit without many honest-to-goodness shocks. The same holds true of Craig Gillespie's remake, which, with a similar brand of self-aware playfulness, retains its predecessor's sturdy narrative foundation: horny geek Charley (Anton Yelchin) discovers that new next-door-neighbor Jerry (Colin Farrell) is an ancient bloodsucker, and enlists the help of famed vampire killer Peter Vincent (David Tennant) to help execute the undead fiend. That lighthearted spirit goes a ways towards lending verve to the modernized Vegas-set story, in which Charley has abandoned his dorky past—including former best pal Ed (an underutilized Christopher Mintz-Plasse)—for popularity and a hot girlfriend Amy (Imogen Poots). It won't ignite the box office, but this teen-targeted effort blends creepiness and comedy with enough chemistry to spark some slow yet steady financial heat.

Charley's enhanced social standing isn't the only cosmetic change in this updated version. Making Amy and Charley's single mom (Toni Collette) swoon, Jerry is now a tight t-shirt-wearing stud with a fondness for The Real Housewives of New Jersey, and Peter is a drunken cross between Criss Angel and Russell Brand who dons fake hair, tattoos and piercings for cheesy stage shows as a slayer of nightwalkers, and otherwise spends his time ensconced in a religious artifact-decorated suite guzzling from liquor bottles he hilariously keeps handy in the pocket of his silk robe. And this time it's Ed who tips Charley off to Jerry's true nature, an allegation that Charley greets with predictable incredulity until, in one of many expertly paced scenes of quietly dawning tension, he discovers that his uninvited neighbor is conspicuously incapable of crossing the threshold of Charley's house.

Gillespie stages this scene, as well as a later sequence in which Charley attempts to dodge Jerry in the vampire's living room while ushering a bitten girl to safety, with a patience and clarity that allows suspense to build with methodical tautness. Such high-wire energy frequently offsets the dull, flat darkness that enshrouds much of Fright Night's nocturnal action, an aesthetic shortcoming that can't be fully excused by the film's cookie-cutter tract-house setting, and is exacerbated by light-dimming 3D. Those optical effects are used to gimmicky effect throughout, all in an apparent attempt to further wink at the audience about the material's silliness, and they're distracting in an off-putting way that degrades the otherwise freewheeling atmosphere—never more so than in a look-at-me CG-assisted single-take shot (shades of I Saw the Devil's stabby centerpiece) from inside a fleeing car.

If the film's bland, monochromatic appearance is a letdown, Jerry's ferocious-looking mouthful of teeth is not, nor is Marti Noxon's script, which acknowledges vampiric lore (and Twilight's lameness) without ever devolving into insider-baseball smugness. Wisely, the momentum is kept brisk enough to overshadow the flick's more schematic plot devices (such as the underlined early sight of Century 21 signs with wooden stakes—what a recession-appropriate way to kill a modern Nosferatu).

What really keeps Fright Night's pulse throbbing is a trio of vigorous performances that compensate for a general dearth of terror. Holding the tale's spooky-funny center is Yelchin, who manages the not-inconsiderable feat of coming off as both nerdy enough to be an outcast and still canny and self-possessed enough to also meld with the jock-bully crowd. He's the anchor that tethers Fright Night to earth even as its two showboating turns by Tennant and Farrell threaten to launch it into unbridled campiness. That they don't is indicative of Gillespie's ability to strike a steady balance between humor and horror. Ultimately, however, it's Farrell who gives the proceedings malevolent life. Even though his role squanders its potential to stir up Charley's daddy-abandonment issues as a father figure surrogate that mom totally wants to bone, Farrell's jet black eyes glint with mischievous, cool-customer cruelty that's far more unsettling than the film's tongue-in-cheek gore.