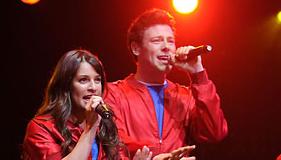 Glee's brand is like the military industrial complex: it's enormous, multi-platform and in so many places it's almost transparent. This TV show has spawned CDs, board games, snack food endorsements and now live concerts and 3D films-what started as High School Musical for network TV has morphed into a far larger and more comprehensive entity. While the sing-songy travails of a band of diverse high school students may sound a bit twee, this 3D concert film seals the property's role as a monolith of popular culture, and for a culture built on hyper-precise niche markets, that's really saying something. It'll make a mint because the fans love it; it'll deserve the money because its heart's in the right place.

Glee 3D follows in line with broad interest concert films (think Mark Pellington's U2 3D) and more "backstage access" musical docs (Sony/Hot Ticket doc Celine Dion: Through the Eyes of the World). The Glee kids appear here in character but extracted from their storylines, so the world on their side of the fence is always a natural looking "show" and their onstage performances are extensions of their easy charm and polished skill. The film becomes a documentary outside the amphitheater, where fans enthusiastically answer questions and three gleeks are featured in longer storylines, each proving that by touting diversity, Glee has taught them to get along. Glee leaps past antiseptic politeness or political correctness—it's got its crosshairs on self-acceptance and personal pride, and the film proves the agenda is working.

The concertgoers are still getting free airbrushed Glee tattoos and calling out for their favorite characters when we enter the backstage space. The cast is too big for everyone to have their moment in the make-up mirrors but Rachel (Lea Michele), the squeaky cleanest soloist of the bunch, has the first moment alone to explain her "lukewarm, not hot!" beverage and warm up process. Bitchy Britney (Heather Morris) waxes vain while Mercedes (Amber Riley), Glee's Aretha Franklin, shoots her cutting glances. The cast is so big it's hard to resist referring to them by their traits (hot preppy, dumb guy, the black one, the fluffy one, wheelchair kid) which the kids ultimately embrace later in a number set to Lady Gaga's "Born this Way" in which they don "Born this Way" shirts and cheer for their own quirks. (Think "four eyes," "bad attitude," Lebanese"-so much for the nurture argument.) While the simple but dramatic set pieces are consistently mesmerizing, the film is really a valentine to the fans.

I should mention the screening I attended (wisely) involved a few handfuls of teens invited to show the non-believers how to worship. And did they ever praise! They only had to say "Warbler" and the girls in my section swooned loudly. It was G-rated adulation and seemingly involuntary-the viewers, both boys and girls, were so thrilled they couldn't contain their excitement (some tried, which was fascinating), and they sung along to the film's reprisal of recent and classic pop songs. It's like armchair Rocky Horror with no expectation of dancing or throwing rice (yet) and more modest attire (well, except for Britney's solo). And the songs are basically Top 40 so most everyone can sing along. When "can't dance" kid sings Rick Springfield's '80s hit "Jessie's Girl," the audience reaction-cam singles out thrilled moms. I'd call it manipulative if it didn't seem so invested in the self-acceptance of its audience.

Between the song and dance numbers, we take lithe little journeys into the lives of three fans, each of whom formerly felt like an outcast, but because of Glee, they vow, they've found friends and understanding amongst their peers. Janae is a cheerleader and up for Prom Princess. A strikingly confident girl, her dwarfism impedes her not at all; in fact, she regards the awkwardness of others to her small stature with sympathy. Trenton was forced out of the closet in 8th grade when a friend dropped his diary on the desk of his secret crush. Trenton recalls his decision to burn his diary, a crushing moment that doubles back to prove that Glee's highest priority is self-acceptance. But the most touching fan segment is about Josie, a girl with Asperger's who, because of the Glee fanbase, has a rallying circle of friends backing her as she forges new (possibly romantic) relationships.

We have a lot of niche music today, so much that it's increasingly difficult for us to share one song or one common cultural experience-there is no new Michael Jackson song on the radio that everyone knows (I credit Popdose.com's Jeff Giles for planting that seed in my head). Glee's massive stature, its branding comprehensiveness and its broad appeal bring Glee as close to the monolithic cultural event as we've got-and I'm all for it.