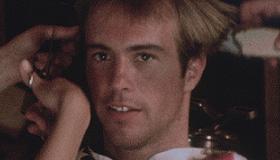 As pretentious as its convoluted title, Filmmakers Alex Gibney and Alison Eastwood's (yes, Clint's daughter) stitched together documentary chronicles author Ken Kesey (One Flew Over The Cuckoo's Nest) and his "Merry Band of Prankster's" LSD-laden cross country trip to the 1964 New York World's Fair to experience "the world of tomorrow." Sadly, the doc just doesn't have enough coherent passages to make anything about this now seemingly ancient journey compelling for contemporary audiences. Although Kesey and Eastwood are to be commended for taking on the gargantuan task of combing through 100+ hours of footage on the subject, the one hour and forty seven minutes worth we have to sit through is more painful than entertaining. Box office returns should be anemic, but post-hippies might find this "nostalgic" trip a lot more magical than the rest of us when it hits VOD and DVD platforms as fast as you can say ‘Lucy in the Sky With Diamonds.'

No question that Gibney, Oscar winning documentarian of such films as Taxi to the Dark Side, Enron: The Smartest Guys in the Room and No End In Sight among others, knows his business, but whatever made him want to tackle this rather frivolous, long-forgotten material is a real head-scratcher. Other than as a historical project for The Film Foundation, History Channel and UCLA Film Archives, this mishmash of footage could have been anyone's vacation home movies (and it's just about as bearable). Apparently the Pranksters shot this all on 16MM with the intention of making this documentary about their trip themselves. But the film was never finished and this footage has, for the most part, been locked away in a vault until it surfaced in this doc. Actually, after coming off their LSD highs, Kesey and the Pranksters probably looked at the stuff and wisely decided to move on. Too bad Gibney and Eastwood didn't do the same.

Certainly many great authors and poets have been inspired by the allure of the open road but to give it real shape and meaning takes great talent. The hapless structure employed here, venturing off as it does into awkwardly designed animations resembling bad Sam Arkoff movies circa 1965, just don't register or keep our attention. Although much time is given to the personality profiles of travelers Stark Naked, Gretchen Fetchen, Mal Function, Intrepid Traveler and Generally Famished, none of them, even the infamous Neal Cassidy (immortalized in Jack Kerouac's "On The Road" soon to be its own movie directed by Walter Salles) makes you want to spend this much time with them. The payoff, once they finally hit the Fair, is enormously disappointing, but apparently the message is ‘the joy of life is in the journey, not the final destination.'